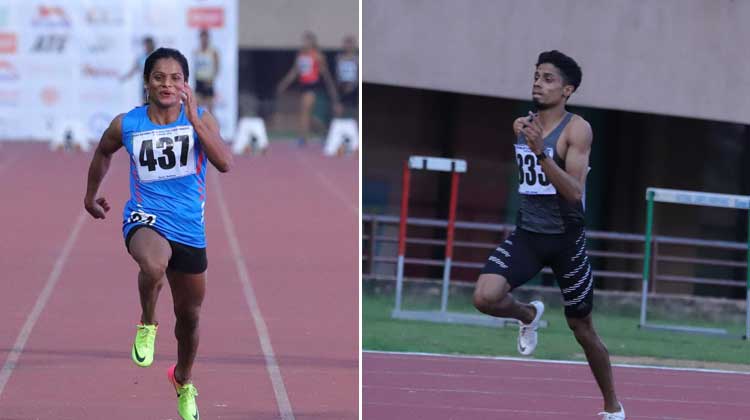 Dutee Chand’s time of 11.22 seconds in the semifinals finally gave her sole ownership of the National record. At the Asian Championships in Doha in April this year, she had equaledRachita Mistry’s 11.26-second effort that held sway since the year 2000. Dutee Chand clocked 11.25 seconds in the final on Friday, leaving Archana Suseendran and Himashree Roy in the wake.

Of course, Dutee Chand would have liked to come up with this performance in the World Athletics Championships last month. She was looking for a better time in Doha but managed 11.48 to place a disappointing seventh in her heats. A time of 11.22 seconds – or even 11.25 seconds in the heats – would have seen her secure a semifinal berth in Doha.

When she arrived in Ranchi, she was unsure of the time she would clock. “A couple of days ago, I had the wrong belief that my body was tired at the end of the season. I recovered well to be able to break the last national mark twice this evening,” she said after winning the final with a measure of comfort.

Her State-mate Amiya Kumar Malik, who has been waiting through the whole season and more to find his rhythm and that elusive gold medal, won the bragging rights as the fastest man in the National Open. He won the men’s 100m in 10.46 seconds, breaking the beam a hundredth of a second ahead of Malaysia’s Jonathan AnakNyepa.

The photo-finish cameras had to identify Gurindervir Singh (Punjab) as the winner of the bronze medal by a margin of 0.0044 seconds from his team-mate Harjit Singh. But it was the manner in which Amiya Malik stormed to the finish that caught everyone’s eye. For someone who had not gone under 10.50 seconds in a long while, he will cherish this drought-ending victory.

MP Jabir (AFI) rewrote the men’s 400m Hurdles meet record, winning the final in 49.41 seconds. He improved on the mark of 49.67 seconds set by AyyasamyDharun (Tamil Nadu) last year. Dharun himself, running only his third hurdles race since recovering from an injury, will be pleased that he clocked 49.50 seconds for the second place, leaving T Santhosh Kumar (Services) in the third place.

Earlier, in a close finish, Haryana’s Rahul Rohilla, 23, won the men’s 20m race walking ahead of the more seasoned K Ganapathi (AFI) and Sandeep Kumar (Services). The Group B winner of the event in the National Race Walking Championship in Chennai in February, he finished on top of a better field this time.

There was some positive news for long jumper M Sreeshankar who leapt to 7.93m to lead the 12 qualifiers for the final.