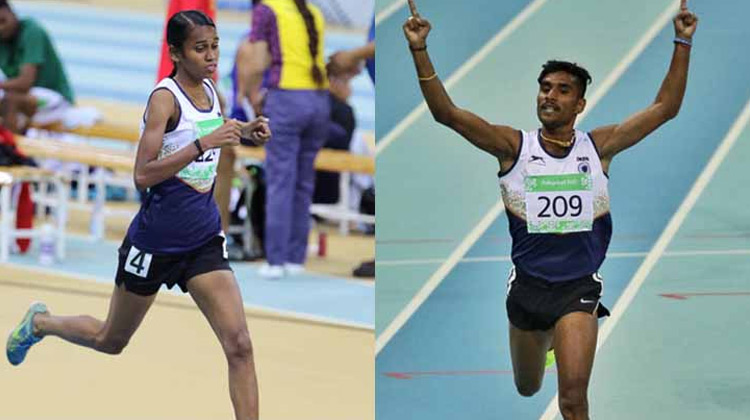 Lakshmanan was the star of the day, winning an expected gold in 3000m run with an 8:02.30 mins performance in the wake of his competitors producing their personal best performances. Tariq Ahamed Alamari (8.03.98 PB) of Kazakhstan and Hossein Keyhani (8.07.09 PB) of Iran had to settle for silver and bronze respectively despite their personal best shows.

“I never had any doubts that I will win the title. Tariq Ahmed (KSA) led most of the rounds but I accelerated in the final two rounds. That had always been my plan. I am very happy to add this gold medal to the Asian Championships 5000m and 10000m titles I recently won.

“My winning time was very close to my personal best over the distance.”, quoted the Asian Athletics Championships’ double medalist.

“I ran a slower pace at the start and sped up in the final two rounds. I am so happy to have won my first 1500m indoor gold medal. Ashgabat 2017 was my first-ever indoor competition and it will always have a special place in my heart,” said Chitra.

“This was not my personal best time over the distance. I am not used to running under cold indoor conditions. It affected my rhythm. So, I decided I wanted the gold medal and not a new personal best time. I am satisfied,” she added.

Meanwhile, Amoj Jacob finished fifth (47.33) in men’s 400m while Dutee Chand missed out on the bronze in the women’s 60m sprint finishing fourth in 7.44s. In women’s triple jump too, Sheena N Varkey of India (12.96) missed out the bronze and finished fourth with 12.96m distance.

Earlier in the morning session, Ajay Kumar Saroj qualified first (3:51.55) in his heat of men’s 1500m for the finals which is scheduled for Day-3.