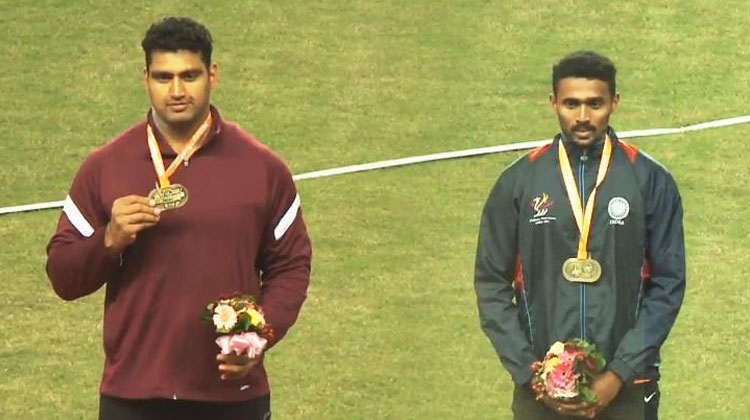 30 April 2017, Taipei: Gold medal-winning performances by Om Prakash Singh Karhana and Mohammad Anas ensured that India ended its run at the Asian Grand Prix 2017 in spectacular fashion. The 14-member national contingent bagged 8 medals in the third and final leg of the event to finish second in the overall medal tally.

Shot putter Om Prakash Singh Karhana clinched gold with a 19.58m effort. The towering athlete from Haryana started off with a distance of 18.27m and achieved an impressive 19.13m on his second attempt before reaching 19.58m on his third try. Om Prakash, who holds the National Record at 20.69m, won two bronze medals in the previous rounds. Jiaxiang Wu (19.21m) of China bagged the silver while Iran’s Ali Samari (18.68m) took the bronze.

Soon afterwards, Mohammad Anas from Kerala grabbed another gold medal for India in the men’s 400m event with a timing of 45.69s. Cong Lich Quach of Vietnam (46.66s) had to settle for silver while Kazakhstan’s Mikhail Litvin (47.03s) won the bronze. Anas had earlier missed the first two rounds of the competition which were held in Jinhua and Jiaxing in China as he failed to get the Chinese visa on time.
In the men’s 800m, Jinson Johnson won the silver medal with a timing of 01:51.35. The 26-year old athlete narrowly missed out on gold, finishing behind Sri Lanka’s Indunil Madusahn who had a time of 01:51.34. Iran’s Mostafa Ebrahimi (01:52.66) finished third.

Gold medallist in the first leg and current world number one Manpreet Kaur picked up a silver medal in the women’s shot put event, with a best throw of 17.33m. Jia Yuan Song of China won the gold with 17.46m while Indonesia’s Eki Febri (15.16m) took the bronze.

Sprinter Dutee chand also won the silver for India in the women’s 100m with her season’s best timing of 11.52s. The Kazakh Victoria Zyabkina bagged the gold with a timing of 11.34s while Tu Chinh Le (11.74s) bagged the bronze medal.

The 19-year old junior World Champion Neeraj Chopra won bronze in men’s javelin throw with a 79.90m effort. The gold and silver medals were won by the Chinese Taipei pair of Shih Feng Huang (80.77m) and Chao Tsun-Chen (79.93m). Neeraj qualified for the World Championships 2017 with his performance in the second leg of the event.