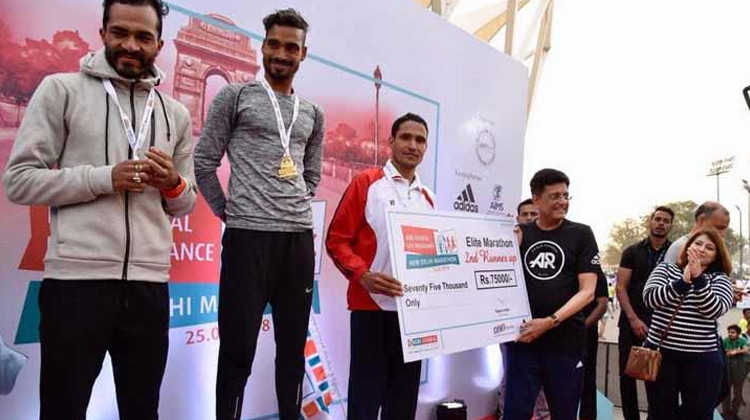 Gopi clocked 2 hour, 15 minute and 16 seconds to clinch the gold under ideal running conditions but missed the tough Commonwealth Games qualification mark set by the Athletics Federation of India.

“This was an opportunity where I needed to try hard and perform my best. I practiced and performed to my highest capabilities, but missed qualifying for the CWG by three minutes,” Gopi said.

“Both Nitendra and I were neck-to-neck until 9 kms, after which I took over. The weather conditions and the route were also quite favourable,” said Gopi, who plans to participate in international marathons like the London marathon to qualify for the Asian Games.

“Usually Gopi and I are head-to-head, but this time my body didn’t respond and adapt to the conditions. Despite good weather conditions, I wasn’t able to give my best and Gopi took the leap after the 9th kilometer,” Rawat said.

“After seeing the difference in timing, I decided to follow the endurance run method. I’m not satisfied with my timing, but will work towards improving it to qualify for the Asian Games.”

The 4:30am start time of the race at Jawaharlal Nehru Stadium, flagged off by cricket icon Sachin Tendulkar, gave the runners an ideal temperature of just over 15 degree celsius — around 18 degree when the race ended — and Gopi was able to better his earlier best of 2:15:25 (clocked during 2016 Olympics) by nine seconds.

The 29-year-old Gopi’s effort was, however, well outside the 2:12:50 qualification standard of the AFI for the Gold Coast Commonwealth Games. He had won the title last year in 2:15:37.

Gopi had won the Asian Marathon title in China in November last year with a time of 2:15:48.

“Last year in Delhi I qualified for the world championship by completing my run in a target time. This year the weather was good, but I could not achieve my target to qualify for the CWG. But I am happy that I completed the full marathon despite my knee injury,” Monika said.

“After 10kms, my knee pain began and I felt the hamstring pull, but it did not hamper my spirit to complete the run. I ran with Jyoti for the first 6 kms. I took a slow start because of my pain, then I gained momentum and started improving my pace. I want to thank my pacer for all his support during the run.”

Around 65 elite Indian athletes took part in the full marathon of 42.195km.