Tejaswin Shankar raises the bar for himself, breaks own national high jump record 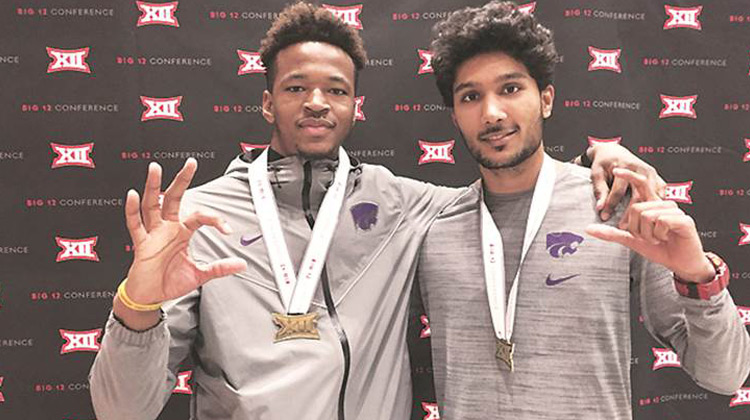 What was Tejaswin Shankar up to on a Sunday morning, a day after rewriting his high jump national record? Doing his laundry. Apart from the technique tweak that has seen him fly higher over the bar, doing household chores is what the 19-year-old has learnt since shifting to the US on a four-year scholarship last year.

At the Big 12 Indoor Athletics Championships in Ames, Iowa, his third competition since joining the Kansas State University, the Delhi lad broke his own national record (2.26m) with a leap of 2.28m, the effort getting him a bronze. Just last month in another indoor meet, he had a jump of 2.19m. The national record will enter the record books once the Athletics Federation of India ratifies it.

Putting Shankar’s jump into context, the 2.28m effort would have got him a silver medal in the 2014 CWG. Derek Drouin of Canada had taken the gold home with a 2.31m leap in Glasgow. Shankar believes that the reason for this sudden surge in his performance is the “major changes” he’s made in his technique just five days before the competition. It came about as a suggestion from his coach Cliff Rovelto when the youngster approached him with an issue.

“I had this tendency to go towards the bar instead of going upwards,” he said. “I asked sir for a solution. He (Rovelto) asked me if I would like to use the two-handed technique (dropping both the arms before taking off). I had no clue what he was talking about. All my life I had used the single-hand jump. Ye toh wahi baat ho gayi ki aapne jo aadmi ek pair se chalta tha, usse do pair se chalna sikha diya,” Shankar tells The Indian Express from Kansas.

Federation Cup the next challenge
Back home in Delhi, Shankar’s mother is ecstatic at her son’s record-breaking effort and is planning a feast for him after he takes part in next month’s Federation Cup in Patiala, which will serve as a trial event for Commonwealth Games.

“This is such a proud moment for us. I know he (Shankar’s father who passed away in 2014) is watching and is present with us at this moment. My son called me but we couldn’t talk much because he had to travel. He sounded so happy,” Shankar’s mother said.

Even Shankar was a bit surprised that he could deliver such an effort despite not being fully fit. “So funny that even after jumping 2.28m I finish 3rd. #NationalRecord,” he tweeted, indicating the level of competition in the meet.

“He’s simply gifted. Kids take six months to learn what he does in a matter of days. I can’t explain how he does it,” his childhood coach Sunil Kumar says. “Talent ki toh kami hi nahi hai iss ladke mein,” said Kumar, who introduced Shankar to athletics, says.

Another major change that Shankar made to life style while in US concerns his diet. The strict vegetarian, goaded by a nutritionist who was concerned about the young athletes’ natural protein intake, ate fish for the first time. The switch proved to be an event of sorts at the college dorm.

“I had fish for the first time last fortnight. All the kids in the dorm surrounded me while I took my first bite. Honestly, it tasted awful,” the teenager says before adding. “You will put this in paper? Mummy will scold me.” 2018 is an important year for Shankar, who is expected to travel for CWG and Asian Games.

“When I went to watch the 2010 CWG Games in Delhi, I didn’t even know what athletics was. Someone gave a free pass so I went there. Now eight years later I am on the verge of taking part in it,” he says.

The dream keeps getting better for the Indian teenager in US.

Shankar has been habitually setting records. In 2016, he broke the national record while in January this year, he bettered the indoor record. Now, he has improved his own.

November 2016: Shankar, just 17 then, performed beyond expectations to register a senior record at a junior meet. He made a jump of 2.26, a cm better than the previous record set back in 2004.

January 2018: At his first competition since moving to the US, Shankar matched an 11-year-old indoor national record set by Hari Shankar Roy in 2007 with a leap of 2.18m.

January 2018: In the same month, he added a centimetre to his jump and bettered Roy’s indoor record with a 2.19m leap at the Razorback Invitational in Fayetteville,
Arkansas.

February 2018: Shankar, armed with a new technique, improved on his previous indoor best by almost 10 cm and also surpassed his outdoor record set in Coimbatore in 2016.

(As published in Indian Express)