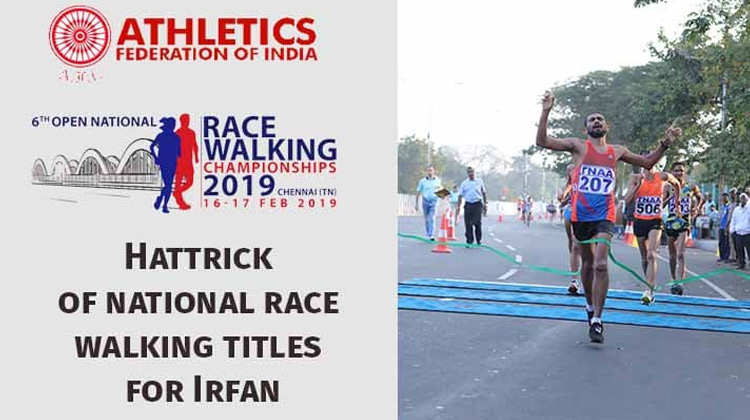 Chennai. In a contest that went down to the wire, Irfan KT won his third consecutive gold medal in the men’s 20km race national championships. At the 6th National Open Race Walking Championships on Saturday, Irfan clinched the top spot by the margin of a single second. Irfan, who finished 10th at the 2012 London Olympics, was trailing in third place at the start of the final lap on Saturday morning but sped up when it mattered to win gold in Chennai. It was a dramatic conclusion to a tightly fought race in which the top four athletes finished within 2 seconds off each other after 20km.

The race also saw the participation of two international athletes – Loo Choon Sieng of Malaysia and Jya-Hsin Lin of Chinese Taipei. While the Chinese Taipei athlete failed to complete his race, Sieng of Malaysia came 11th with a time of 1.42.00.00.
While the race provided a thrilling finish, it failed to deliver a timing that would help qualify an athlete for the World Championships to be held in Doha in September this year. The qualification standard in the men’s 20km race walk stands at 1.22.30 seconds.

The women’s 20km race walk was won by Soumya Baby of Kerala who clocked a time of 1.40.25.00 seconds. While she was never threatened for the gold, Baby would be disappointed at having fallen well short of her national record, of 1.31.29.00 set in February last year. She finished nearly a minute ahead of Uttar Pradesh’s Priyanka who clocked a time of 1.41.20.00. The bronze medal was won by Haryana’s Ravina who stopped the clock with a time of 1.41.46.00. The fastest international athlete was Chinese Taipei’s Wei Tzu Lin who finished 11th with a time of 1.54.41.00. Malaysia’s Nurul Kamarazaman recorded a time of 1.58.55.00. The qualification standard at the World Championships is set at 1.33.30 seconds.