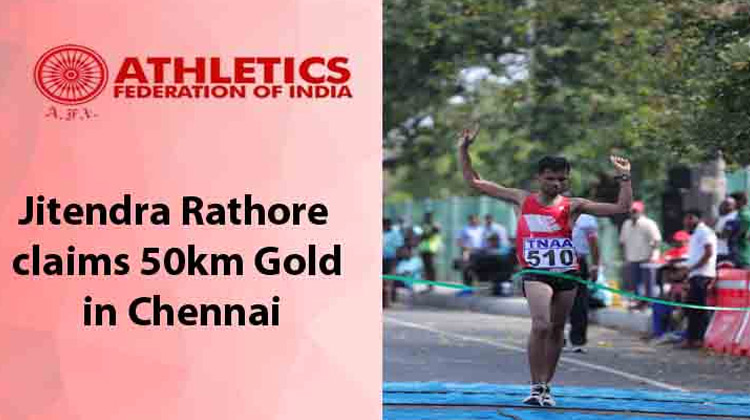 While Rathore was able to confirm the gold medal in the first race walk competition of the Indian calendar for 2019, he would not be satisfied with his timing. The National Open Race Walking Championships were meant to serve as an opportunity to qualify for the Athletics World Championships to be held in Doha in September this year. The qualification standard for that competition stood at 3.59.00. To make that mark, Rathore would have needed to record a time close to his personal best which stands at 3.58.56 recorded at the Indian Race Walking Championships in New Delhi in February last year.

While Rathore might have wanted to improve on that mark, he was impeded by the conditions in Chennai. On a cloudless day temperature hovered in the low 30 degrees mark in the South Indian city. “It was difficult to compete in the heat. I would have recorded a faster time but I was not able to push myself further because of the conditions today,” Rathore said after the race.

While Rathore completed the race, Sandeep Kumar, who holds the national record of 3.55.59.5 set at the Indian Race Walking Championships last year, did not start the contest.

The gold medal in the girls 10km race was clinched by Roji Patel of Uttarakhand who crossed the finish line in 53.38.00. Patel was over four minutes off the national record of 49.16.51 set by P Goswami in 2014. However Patel was nearly two minutes ahead of Suvarna Kapase of Madhya Pradesh who came in second with a time of 53.36.00. Punjab’s Gurpreet Kaur took third place with a time of 57.00.00.