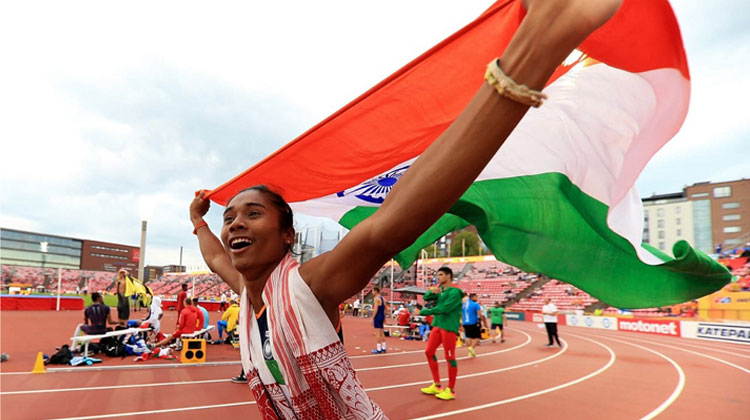 Hima Das created history at the U-20 World Athletics Championships in Tampere, Finland on Thursday, winning the women’s 400m to become the first Indian track athlete to win a gold medal at a global athletic event.  Das clocked 51.46 seconds to beat Romania’s Andrea Miklos who finished a distant second in 52.07 seconds while Taylor Manson of USA trailed further back to take bronze in 52.28 seconds. Das is only the second Indian athlete to have won a gold at the U-20 World Championships following javelin thrower Neeraj Chopra who won his title in the 2016 edition.

The 18-year-old from Assam was considered the odds on favourite to win the event having entered the competition as the fastest in the field. She didn’t show any sign of vulnerability in the competition, winning both her heat (with a time of 52.25 seconds) and the semifinal (with a time of 52.10 seconds).  She would only improve on that time in the final. Running in lane four in the final, Das appeared to have got off to a slow start and seemed to be under pressure at the first bend. She also appeared to be trailing behind the leaders at the 300m mark but kept a cool head and managed to reel them in steadily in the final stretch. She eventually win with a sizeable lead over her rivals.

Das’ victory is only the latest high point in a career that exploded ever since she first began her athletics career in 2016. Born in Dhing village of Assam, Das was originally a football player before she shifted her focus to athletics. Although a late starter, Das, first made a mark at the 2017 Youth Nationals and was subsequently picked for the Asian Youth Championships where she finished seventh and then took part at the World Youth Championships the same year where she finished 5th in the 200m.

Das shifted to the 400m soon after and continued to find success. She won the Asian Games Test event in February this year and subsequently qualified for the Commonwealth Games with a victory at the Federation Cup in March. Das was one of the stand out performers at the Gold Coast Games and nearly pulled off a huge upset before eventually settling for sixth in a high class field in the final of the 400m.

Das has since steadily improved, winning a gold medal at the Inter State Championships in June with a personal best time of 51.13 seconds. Although Das was not able to match that effort at the Ratina Stadium in Tampere, there will be little doubt that the gold medal will be a prize she will be more than satisfied with.