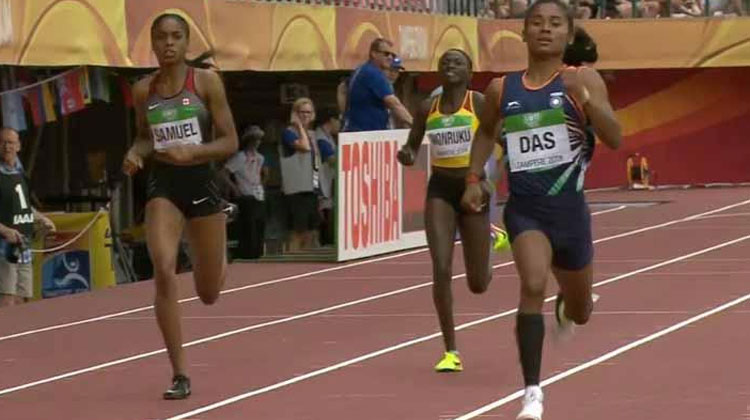 Bidding to become the first Indian track athlete to win a medal at the Junior World Championships, Hima Das qualified for the final of the women’s 400m at Tampere on Wednesday. Das won the first of three semifinals in the Ratina Stadium, clocking a time of 52.10 seconds. She however was far slower than her personal best of 51.13 seconds recorded at the Inter State Championships in Guwahati last month.

Das though, was by far the fastest athlete across the three semifinals on Wednesday and will be favourite to win the final on Thursday. Andrea Miklos finished in second place with a time of 52.48 seconds. Taylor Manson of USA who is expected to provide the toughest challenge to Das won her semifinal in 53 seconds while Ella Connolly of Australia won the final semifinal in 52.78 seconds.

There would however be disappointment for the other Indian running the 400m semifinals. Jisna Mathew finished fifth in the second semifinal clocking a time of 53.86 seconds. That was short of her season’s best of 53.26 seconds that she had recorded en route the 400m gold at the Junior Asian Championships in Japan last month and well short of per personal best of 52.65 seconds.

Das though was not the only Indian to qualify for the final of her event. Earlier in the day, Ashish Jakhar also made it to the final of the hammer throw (6kg) event at Tampere’s Ratina Stadium. The 19-year-old booked his place with a throw of 70.52m. That mark placed him in eighth place of a total of 12 qualiefiers who will compete in the in the final to be held on Friday.

Jakhar, was in strong form coming into the tournament, having won a gold medal at the Asian Junior Championships with a national record setting effort of 76.86m. He would not come near that mark in Tampere though. After fouling his first effort in Tampere, he recorded a throw of 70.52m in his second attempt before finishing his day with a throw of 70.33m. Jakhar though will have to throw close or improve on his personal best if he is to give himself a chance of a podium finish. Britain’s Jake Norris leads the field with a throw of 76.95m.

There would be little to cheer for Damneet Singh, the other Indian in the hammer throw competition. Singh had won a silver medal at the 2017 World Youth Championships but could not find anywhere close to that form on Wednesday. Singh had a best throw of 67.48m to finish 14th in a 31 athlete competition. Damneet would be particularly disappointed for he had come into the competition with a season’s best throw of 74.08m that that won him a silver medal at the Asian Junior Championships last month.

Also failing to advance was 400m sprinter Gaurav. The 19-year-old from Haryana finished fifth in his heat to crash out of the competition with only the top three in each heat and the three fastest losers advancing to the semifinals of the World Championships. Gaurav clocked a disappointing 48.61seconds, nearly two seconds shy of his personal best of 46.93 seconds that he had set en route a gold medal at the Junior Federation Cup in Coimbatore in April.

Earlier, on the first day of the competition on Tuesday,  AshishBhalothia bettered his personal best with an 18.62m effort in the men’s shot put, but that was not enough to carry him into the 12-man final as he finished 14th overall. There was also disappointment in the men’s 1500m heat with Ankit, who has a personal best of 3:47.89s, finishing 12th in his heat in a poor 4:05.15s.Also failing to make the final was M. Karuniya who finished 14th in her qualification group with 43.96m in the women’s discus.