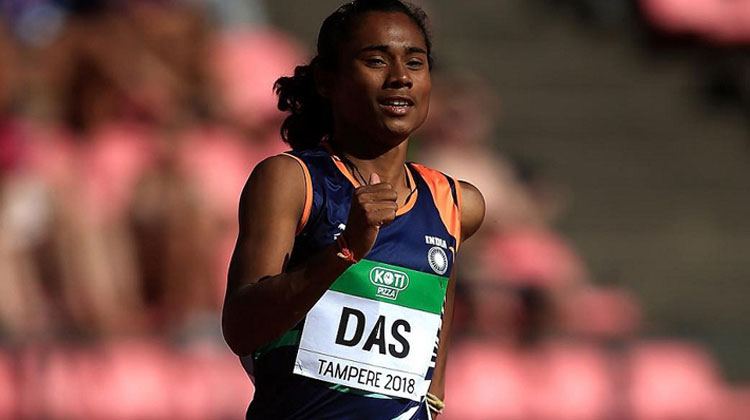 TAMPERE (Finland): Indian Sprinter Hima Das made it to the semi-finals of the women’s 400m as the faster runner in the heats on the opening day of the IAAF World Under-20 Athletics Championships on Tuesday

The 18-year-old Das, a favourite to ein gold, clocked 52.25 seconds to win heat number four and lead the time charts. Running at lane number three, Das beat Stacey-Ann Williams of Jamaica (52.71) in the fastest of the five heats

Anoter Indian, Jisna mathew also qualified for the semi-finals by winning the fifth heat in 54.32 seconds

The first four finishers in each heat and the next four fastest qualify for the semi-finals which will be run on Wednesday.

Das is a favourite to win gold as she is the U-20 season leader in this quartermile event. Assam girl happens to win gold, she will become the first Indian athlete to do so in a track event in an U-20 World Championships.

Das clocked an Indian U-20 record of 51.32 seconds to finish sixth in the Commonwealth Games 400m final in Gold Coast in April. Since then, she has gone onto improving her timings. She lowered the Indian U-20 record in 400m to 51.13
seconds while winning gold in the recent National Inter State Championships in Guwahati.

M Shreeshankar finished fourth in the qualification round of men’s long jump event with an effort of 7.68m to make it to the final round. Compatriot Lokesh Sathyanathan, however, finished 17th with a jump of 7.31m.

In men’s shotput, Asish Bholothia finished eight in Group A qualification round with a personal best throw 0f 18.62m but that was not enough to make it to the final round.

India is being represented by 31 athletes at the six-day Championship.