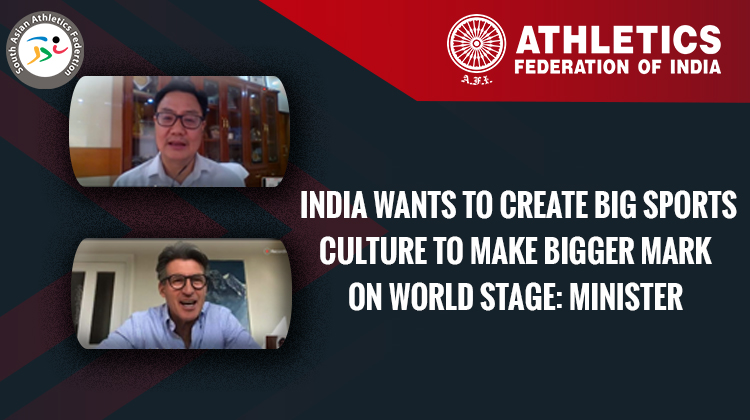 AFI Media
New Delhi, April 25: Union Minister for Youth Affairs and Sports Kiren Rijiju today said Government’s policy
would be conditioned according to the needs of the sports community. “We want to create a big sports culture in the
country so that we can improve our presence in world sport. It is our obligation to raise the level of sport in India,” he
said.

He was speaking the inaugural session of the six-day online technical officials’ seminar jointly conducted by the South
Asian Athletics Federation and the Athletics Federation of India, Mr. Rijiju said Government would frame athlete-centric
and sports-centric policies .

“Athletics is the heart and soul of the Olympic Games and we need to raise the level of our athletics,” he said, referring to
India accounting for one-sixth of the world’s population. “I want to give the young athletes the opportunity to realise their
dreams.” He said a number of moves had been initiated to enable India to make breakthrough in realising its potential in
sports.

World Athletics President Lord Sebastian Coe complimented SAAF and AFI for conceiving the six-day seminar. “Our sport
simply does not function at any level without the contribution of the technical officials,” he said. “It would be
unrecognisable without one of our sport’s most endearing aspects, the enshrining of the volunteer contribution 24×7.”
Lord
Coe said World Athletics’ major task in the time ahead was to keep as many of its competitions intact. “We owe it to the
athletes and the Member Federations to maintain a structure that we can optimistically look forward to so that we can
give the athletes the chance to get back to competition as soon as is possible, but in a fair way,” he said.

Referring to World Athletics decision to suspend the Olympic qualification till December 1 this year, he said the structure
would have to be designed so that the athletes return to the competition in a fair way. “We need to ensure that our
athletes get back to competition safely and securely and in a way that does not damage the integrity of all our
competitions,” he said.

Lord Coe, who said he was a pencil-and-paper person till the outbreak of Covid-19, was happy to be a part of the largest
online gathering of technical officials. “I know the Indian Federation has embraced technology in a big way not only to
reach larger audiences but also to meet the sustainability challenge by getting rid of paper.”

In his opening remarks, Athletics Federation of India President Adille J. Sumariwalla said AFI had been in the forefront of
using technology for several years now. “AFI is the first national federation to host online courses for coaches and
technical officials. We also plan on having our annual general meeting on May 2 and all our sub-committee meetings
online,” he said.