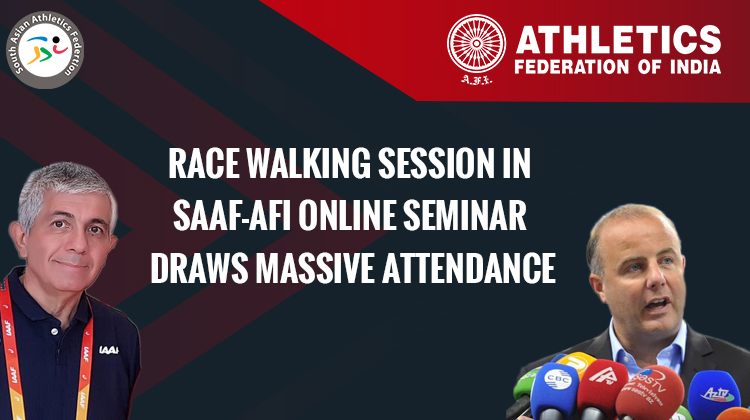 Answering a question on why there were more disqualifications in race walking than in other events at the world championships, Mr. O’Callaghan said there could be a number of reasons, including a walker trying too hard or being too nervous and making mistakes as well as coming through to the biggest event after passing scrutiny by inexperienced or lenient judges.

Race walking accounts for more than a third of the 885 disqualifications in the IAAF World Athletics Championships since 1983. “Obviously, they have been disqualified because they were found to be not complying with the rules. For, race walking is a borderline very sport,” he said, after showing the participants common violations made by race walkers.

Mr. O’Callaghan also sought to allay the fears of track and field officials that prevents many of them from talking up Race Walking judging, reassuring them that it is not so technical and complicated as many imagined it to be. “It is a simple sport, race walking. Very basic human movement. Not everyone will jump a hurdle or throw a javelin, but everyone walks,” he said.

The simplicity with which O’Callaghan spoke about judging race walking enhanced the knowledge of the Technical Officials. “I am sure that whether or not they become race walking judges, they will all be able to enjoy watching the event the next time they are in any athletics meeting that includes race walking,” he said.

A regular visitor to India including to conduct Race Walking Judges courses, Mr. O’Callaghan said that with its population, passion and enthusiasm, South Asia is the sleeping giant of world athletics. He said the seminar, a brainchild of AFI President Adille J Sumariwalla and AFI Planning Committee Chairman Dr. Lalit K Bhanot, was a step towards awakening the giant.

Mr. O’Callaghan was addressing 911 technical officials from eight South Asian countries who attended the third day’s session in the five-day online seminar hosted by the Athletics Federation of India and the South Asian Athletics Federation. The seminar, designed to update the knowledge of the Technical Officials in the region, will conclude on Wednesday.

At the inaugural session on Saturday, World Athletics President Lord Sebastian Coe said that, in his estimation, the SAAF-AFI Seminar was the largest online gathering of Technical Officials.