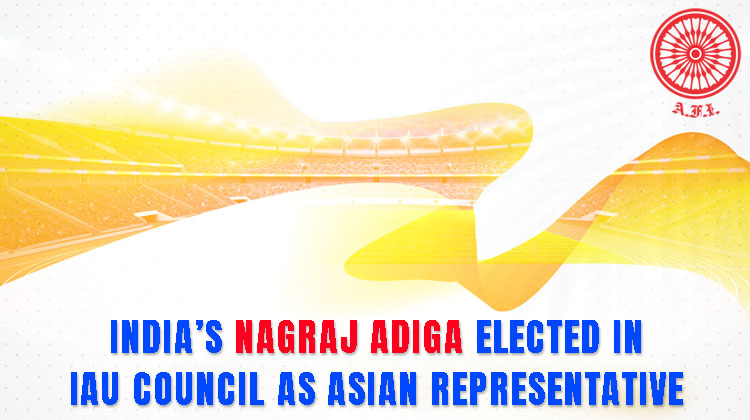 New Delhi. India’s Nagraj Adiga has been elected as the Asia-Oceania Representative at the recently concluded 2021 International Association of Ultrarunners (IAU) Congress at which the IAU council elections were held. The pandemic caused the congress to be virtual and elections were held online from the 22 May 2021 onwards. For the Asia-Oceania representative, voting was held over a 24-hour period on Wednesday-Thursday where a total of ten countries from Asia and Oceania region casted their online vote.

Adiga, who was nominated for elections by the Athletics Federation of India, got elected by a margin of 7-3 against South Korea’s Gilsoo Park.

Adiga works closely with AFI and with various Government bodies to promote health, fitness, and encourage budding sportspersons. He said, “My sincere thanks to AFI for giving me this opportunity to represent India at the highest level in ultra running world. I will give my best to promote the sport of ultra running across Asia and Oceania region and help form new partnerships within Asia and Oceania regions.”

In 2015 he introduced the Indian running community to stadium ultramarathon events. This led to Indian ultra runners meeting criteria set by the Ultra & Trail Running Committee of the AFI to participate at International Championships held by the IAU and ITRA. Adiga, a runner himself, has encouraged ultra runners and has been the main sponsor for teams sent to World and Asia & Oceania Championships. Since 2017 when India became member of the IAU and eligible to send teams for the Championships, India has won the bronze medal (Men Individual and Team) at the 2018 IAU 24 Hour Championships at Taipei and 2019 100 Km Championships at Jordan. Indian runners have improved immensely with a number of men running well past 215 Km in 24 hours, the record being that of Ullas Narayana (250 Km), and Apoorva Chikara raising the bar for Indian women to run past the 200 K mark.

Congratulating Adiga on his election AFI President Adille J Sumariwalla said, “The sport of Ultra and Trail running has grown rather rapidly in the country ever since we sent the first Indian team in 2017 to the ultra running championships. The support by Mr Adiga has made it possible for runners to push themselves to reach international standards. His keenness to promote the sport further, saw AFI – NEB Sports winning the bid to host the IAU 24 Hour and IAU 100 Km Asia & Oceania Championships in 2020 and 2021 respectively, which unfortunately had to be called off owing to the prevalent pandemic conditions. If the sport has to grow further in Asia & Oceania, Adiga was the natural choice of AFI and we are grateful for the support we got from the member federations of the Asia & Oceania region to for his election.”