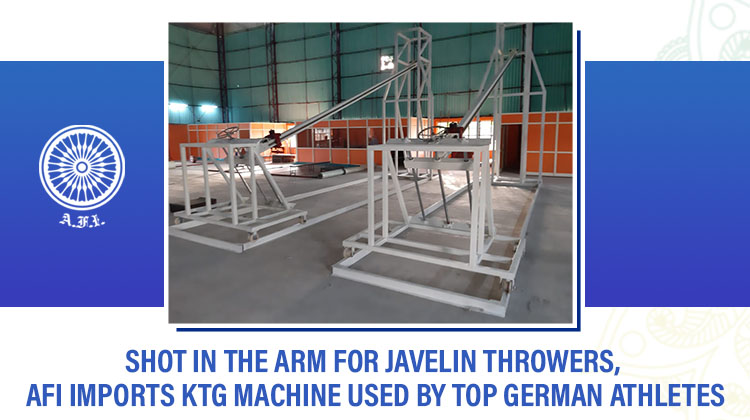 New Delhi. India became the world’s third nation after Germany and China to secure special machines to assist its Javelin Throwers develop their strength and speed. These strength training machines were installed in the Netaji Subhas National Institute of Sports, Patiala on Friday. From early 2020, the Athletics Federation of India has been making a continuous effort to procure the equipment from China, but the outbreak of the pandemic delayed the process.

Chief Coach Radhakrishnan Nair, said, “This allows athletes to develop throwing strength that is very javelin specific and believes that the machines will surely benefit India’s Javelin Throwers. They will soon start training on these machines under the supervision of German coaches Uwe Hohn and biomechanics expert Dr Klaus Bartonietz”.

As it is called, The Kraft Training Gerät (German for Strength Training Device) allows athletes to throw along an ideal trajectory with little risk of injury. The device sled weighs 3.8kg and can be loaded with as much as 10k for a maximum weight of 13.8k. The sled is thrown for maximum velocity, measured between two preset points, and captured after each throw.

Interestingly, Dr Klaus was part of the development team of KTG while Hohn was one of the first athletes to use this machine when it was first introduced in the 1980’s in Germany (former GDR).

Dr Klaus, said, “Late elite javelin coach Karl Hellmann who coached greats such as Ruth Fuchs and Petra Felke had the initial idea. We then put our brains together to make a machine like this, I was part of the development team,”

“The key for high release speed is the development of javelin specific throwing power. Lifting weights cannot do this. Athletes must accelerate weights, throw heavy stuff and you can do it on such a machine. But mind you, it is not for young athletes as it is not a magic machine and it can spoil your technique. It is for training of elite athletes only under the supervision of proper coach,” explained Dr Klaus.

AFI President Adille J Sumariwalla said, “These machines are imported with great difficulties due to the pandemic. We wanted German technology and machines but the German company refused to give us these machines. We then found a Chinese company who was ready to sell these to us. I am happy that finally our athletes will be able to get the best training using this.”