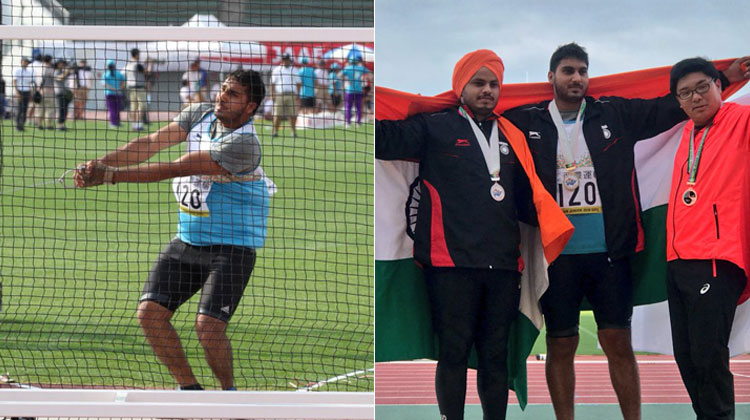 Gifu- Japan. India got their campaign at the 2018 Asian Junior Athletics Championships off to a strong start winning four medals – a gold, a silver and two bronze – on the first day of the four day event. Ashish Jakhar was the star of the opening day, as he set a new national record en route to winning a gold medal in the men’s hammer throw event in Gifu, Japan on Thursday.

Jakhar, a former gold medalist at the 2016 Asian Junior Championships, threw the 6kg iron ball and chain to a distance of 76.86m at the Gifu Nagaragawa Stadium to shatter the previous mark of  75.04m that he himself had set at the Junior Federation Cup in April this year. Jakhar began strongly with a throw of 74.97m in his very first attempt before managing to set a new national mark in his second effort.

Jakhar would be joined on the podium by compatriot Damneet Singh who also managed a personal best in Gifu. Singh, the 2017 World Youth silver medallist, was second with an effort of 74.08m to better his previous best effort of 70.37m recorded at the Junior Federation Cup earlier this year. Singh had recorded a new personal best with his very first throw of the competition (70.42m). He bettered that effort on every subsequent throw before eventually closing out with his best mark of the competition.

There was little worry about the rest of the field catching up to the two Indians. Japan’s Masanobu Hattori completed the podium with a best effort of 69.34m with his last throw of the evening.

After the hammer throwers opened India’s account, Priyadarshini Suresh and long distance runner Poonam Sonune would add to the medal tally. The two secured bronze medals— Suresh in the women’s triple jump and Sonune in the women’s 5000m competition respectively.

Suresh leaped a personal best of 13.08m in her second jump of the competition. The gold went to Vietnam’s VU Thi Ngoc Ha who cleared a distance of 13.22m in her very first attempt while China’s Youqi Pan was the clear second with a final jump of 13.21m. Suresh’s compatriot Sandra Babu finished in fourth place with a best jump of 12.70m recorded in both of her last two attempts.

While Indian athletes won four medals on the first day, they also produced results that suggest there would be more medals to come. Upcoming quartermiler Jisna Mathew was the fastest across the two heats in the women’s 400 metres. Mathews qualified for the final with a time of 54.78 seconds. Mathew, the defending champion, finished  .04 seconds clear of Sri Lanka’s Dilshi Kumarasinghe who is likely to be her nearest competitor.  Compatriot Rachna, however, failed to qualify for the final after clocking a time of 58.07 to finished fifth in the second heat.

Also fastest across the heats in his event was Ajit Kumar who clocked 3:58.46 seconds in the men’s 1500m race.  He however has the ability to clock a much faster time, having recorded a time of 3:53.21 seconds at the Federation Cup in April. Also expected to contest for a medal will be his teammate Ankit. The current Federation Cup champion qualified in fourth place with a time of  3:51.11 seconds but has a personal best of 3:45.15 seconds.