Jisna clinches gold, Sreesankar makes a comeback with a bronze 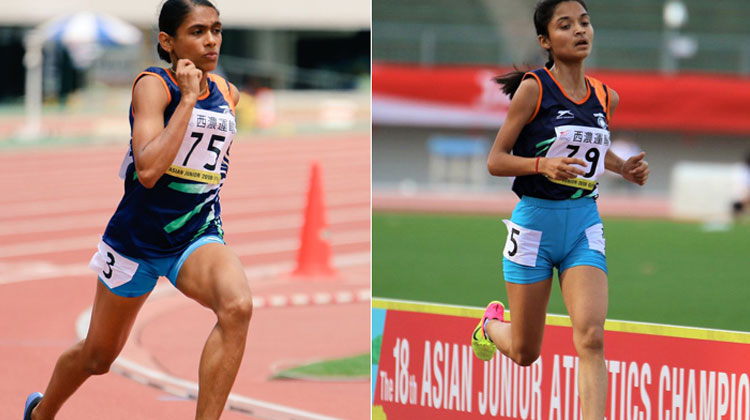 Mathew had gone into the competition as the pre-race favourite and was defending her title from the 2016 edition of the Asian Junior Championships in Ho Chi Minh City. Jisna, a PT Usha trainee with a personal best of 52.65 seconds, had already won a senior Asian Championships bronze medal as well as a gold medal in the relay in the same competition and represented India at the IAAF World championships in 2017. She was also part of the Indian women’s 4x400m relay team at the 2016 Rio Olympics.

The Junior competition on offer at the Gifu Nagaragawa Stadium posed little threat to her. Mathew clocked 53.26 seconds to finish well ahead of Dilshi Kumarasinghe of Sri Lanka who clocked 54.03 seconds. Taking bronze was Jui-Hsuan Yang of Chinese Taipei who recorded at time of 54.74 seconds.

Junior National record holder M Sreeshankar didn’t come close to matching his personal best of 7.99m in the long jump competition but still took back a bronze medal after clearing a distance of 7.47m. Sreeshankar, who nearly touched the 8m mark at the Federation Cup in Patiala in March this year, had to step back after being diagnosed with appendicitis the same month. In Gifu, Sreeshankar was in fifth place after three attempts before clearing 7.47m in his fourth attempt of the competition to overtake Yu-Tang Lin of Chinese Taipei who had cleared 7.46m. Gold went to Japan’s Yugo Sakai (7.61m) while China’s Keqi Zhou (7.54m) took silver.

Shot putter Ajay Bhalothia won his second medal at the Asian Junior Championships after having claimed a silver medal at the 2016 edition. Bhalothia hurled the 6kg iron ball a distance of 18.22m to finish behind Qatar’s Moaaz Mohamed Ibrahim (18.57m) and South Korea’s Yeo Jinseong (18.25m). After recording two poor throws of 15.79m and 16.45m early on, Bhalothia recovered with the 18.22m effort in his third attempt before clearing 18m (18.02m and 18.14m) in his subsequent two throws. However, Bhalothia who has a personal best of 18.53m, registered a foul throw in his final attempt to end any chance of improving the color of his medal.

While Bhalothia fell short of his personal best, it took a career high effort from high jumper Abhinaya Sudhakara Shetty to step on the podium. Shetty cleared 1.75m to claim bronze. Just last month she had cleared 1.60m to win a bronze at the South Asia Junior Championships in Colombo. In Gifu, Shetty began with that mark before clearing heights of 1.65m, 1.69m, 1.72m and subsequently 1.75m. Shetty made three attempts at 1.78m but failed to clear that mark. She finished behind Ching Jung Tsai of Chinese Taipei (1.78m) while Iraq’s Maryam Abdulhameed Abdulelah took gold with a clearance at 1.80m.

India’s final two bronze medals came from Kartik Kumar in the men’s 10000m and Durga Pramod Deore in the women’s 1500m race respectively. The men’s 10000m race was a closely fought affair with a wide gap between the medalists and the rest of the pack. Kumar, clocked a personal best of 30.05.30seconds to finish well ahead of fourth placed Japanese Takuro Miuka who finished with a time of 30.55.80 seconds. Kumar though was beaten to silver by Yuhi Nakaya (30.04.24 seconds) while Suolangcairen of China took gold with a time of 30.01.51 seconds.

In the women’s 1500m race, Deore improved on the 4.31.38 she had clocked at the South Asia Junior championships in May. Deore’s time of 4.24.56 was enough to get her on the podium behind the Japanese pair of Tomomi Musembi Takamatsu (4.21.65seconds) and Ririka Hironaka (4.17.62 seconds)