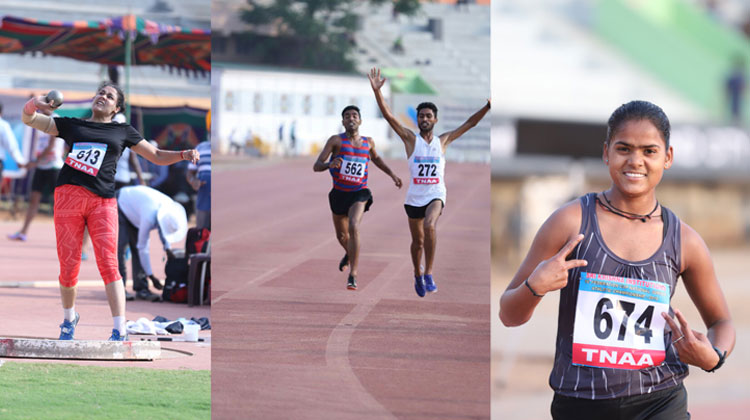 Coimbatore (TN). Under18 National champion Ankit of Haryana, came close to setting a meet record during his gold medal winning run in the men’s U20 1500m race at the 16th Federation Cup National Junior Athletics Championships in Coimbatore on Firday. Ankit, clocked 3:51.81 seconds to fall just short of the old meet record of 3:51:16 seconds set by Shashi Bhushan Singh in 2015. Ankit though was well clear of the field, finishing well ahead of Ajit Kumar of Gujarat, who clocked 3:53:21 seconds to take silver. Bronze went to Kerala’s Abhinath Sundaresan, who finished with a time of 3:53:23 seconds. Sundaresan would be disappointed by the performance considering he is the reigning national champion in the event.

Defending champion – Sanjana Choudhary in the U20 women’s javelin throw — had better fortune. Choudhary, who claimed gold in the 2017 edition in Lucknow, took the same title with ease at Coimbatore. Choudhary threw the spear a distance of 46.97m to finish ahead of Hemamalini Neelakandan of Tamil Nadu who had a best effort of 43.14m. Jyoti of Haryana, took the final place on the podium with an effort of 42.89m.

Kiran Baliyan claimed the women’s U20 shot put event with a throw of 15.23m. The throw, one of only two legal throws made by the athlete from UP, failed to come close to the national record of 15.89m set by Commonwealth bronze medallist Navjeet Dhillon, but it was still well clear of the efforts of statemate Anamika Das, who took silver with a throw of 13.83m. Kachnar Choudhary of Rajasthan took bronze with a throw of 13.52m.

3000m Junior National Champion Gupreet Singh too added a Federation Cup medal to his name. Gurpreet, who claimed the 3000m title in the U18 category, was competing in the U20 5000m race in Coimbatore. He won with a time of 14:46:51 seconds. He finished ahead of UP’s Ajay Kumar Bind and Maharashtra’s Dinesh Kumar, who clocked 14:53:65 seconds and 14:59:44 seconds respectively.

Making the step up to a higher age group would however be difficult for Seema of Himachal Pradesh. The athlete who had won the 3000m women’s U18 title at the Vijaywada Nationals in 2017, could only finish second best in the U20 category in the same event at the Federation Cup. She clocked 9:51:04 seconds to take silver behind Poonam Sonune of Maharashtra who clocked 9:50:61 seconds. Bronze went to Savita Pal of Assam, who finished a distant third with a time of 10:16:16 seconds.

Roji Patel was the only other gold medal winner on a day when four finals were washed out due to rain and bad light. The athlete from Assam won the women’s U20 10000m race walk event with a time of 51:44:52 seconds. She finished ahead of Manju Rani of Gujarat and Sneha of Haryana, who clocked 51:55:07 seconds and 52:08:13 seconds, respectively.