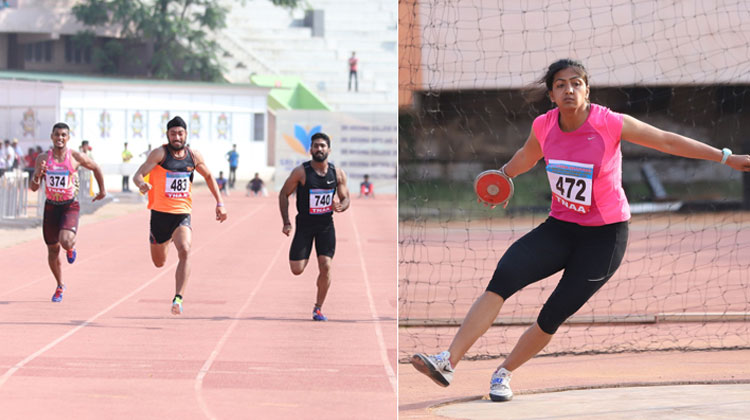 Coimbatore (TN). Gurindervir Singh of Punjab set a new national U20 record as he claimed gold in the 100m at the 16th Federation Cup National Junior Athletics Championships in Coimbatore on Saturday. Singh, clocked a blistering 10.47 seconds to shatter the old mark of 10.57 seconds set by Augustine Yeshudas of Kerala in 2013.  Gurindervir, the gold medallist at the Youth Asian Championships last year, also improved on his personal best of 10.69 seconds.

Gurindervir, who was the reigning 100m champion in the U18 category, finished ahead of the current U20 national champion Akash Kumar of Uttar Pradesh, who recorded a time of 10.65 seconds. Bronze went to Prajwal Mandanna who clocked 10.66 seconds. Reigning Federation Cup winner Nuzrat could only finish 7th with a time of 11.03 seconds.

Another U20 national champion – Sapna Kumari of Jharkhand – also added the Federation Cup medal to the trophy case. Kumari won the U20 women’s 100m hurdles with a new meet record of 13.78 seconds. The 19-year-old was well clear of the old mark of 14.04seconds set by Mukti Saha set in 2001. Kumari’s mark was just short of the national record of 13.59 set by Gayathri Govindarajan in 2010. Kumari finished well ahead of the field at Coimbatore. Pragyan Sahu of Orissa took silver with 14.60 seconds while Nandhini Kongan of Tamil Nadu claimed bronze with a time of 14.68 seconds.

Rio Olympian Jisna Mathews broke little sweat as she eased to the women’s U20 400m gold medal, winning with a time of 54.73 seconds. While Mathews’ time was well short of the national record of 53.00 seconds set 23-years ago, it was more than enough to beat the field in Coimbatore on Saturday. Silver went to Haryana’s Rachna, who clocked 55.49 seconds while Subha Venkatesh of Tamil Nadu finished with a time of 56.19 seconds to take bronze.

Asian Youth Championship silver medalist Ashish Bhalothia also didn’t have to push himself on the day. The shot putter who had a personal best throw of 18.50m only threw 17.89m in the men’s U20 shot put event at Coimbatore. However even that mark was enough to place him on top of the podium ahead of Delhi’s Sahib Singh, who threw the iron ball 17.79m, and Haryana’s Ashish Kumar who recorded a best effort of 17.67m respectively.

While most results followed along expected lines, a surprise was in store in the U20 men’s 400m race. The favoured Akshay Nain, bronze medalist at the Asian Youth Championships and the reigning U18 champion, was pipped to the post by Haryana’s Gourav who clinched gold with a time of 46.93 seconds. The time was a new meet record, erasing the previous mark of 47.08 seconds set by Dharun Ayyasamy in 2015. Gourav, 19, was just shy of the current U20 National record of 46.59 seconds set by Amoj Jacob Also matching the old meet record was Karnataka’s Nihal Joel who clocked 47.08 seconds. Rajesh Ramesh of Tamil Nadu took the third spot on the podium with a time of 47.52 seconds. In what was a very quick race, the favoured Nain took seventh place with a time of 48.36 seconds