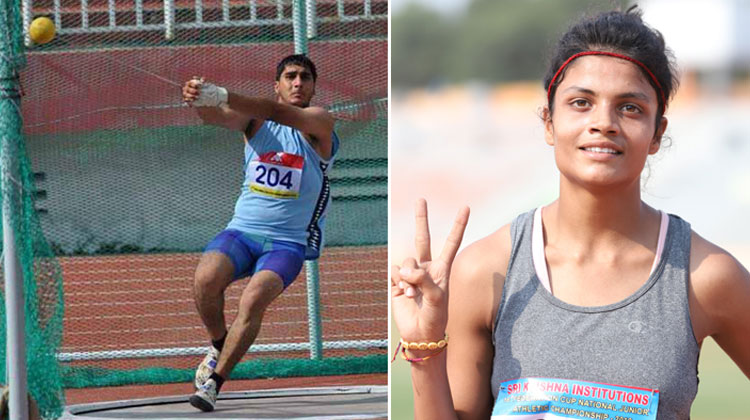 Coimbatore (TN). Ashish Jhakar was the star of the final day of the 16th Federation Cup Junior National Athletics Championships, setting a new national record in the U20 men’s hammer throw event in Coimbatore on Sunday. Jhakar, threw the 6kg iron ball and chain a mammoth 75.04m to shatter the previous record of 71.53m, recorded by Harvinder Singh Dagar at the 2010 Asian Youth Championships in Hanoi. The mark was also a huge personal best for the 19-year-old Jhakar, who had previously had a career best of 69m at the 2016 Asian Junior Championships.

Jhakar, who is a former gold medallist at the Asian Junior Championships set a new record with his very first throw of the competition, hurling the hammer to a distance of 71.60m. He subsequently improved that to 71.96m with his third throw. Jhakar would record the 75.04m mark with his fourth throw but didn’t relax after hitting that mark. He came close to improving even further with throws of 73.69m and 74.70m in his final two attempts.

Jhakar’s efforts put those of the rest of a very strong field to shade. While most eyes at the start of the competition would have been on Damneet Singh, the 2017 World Youth Silver medallist’s best throw was nearly five meters behind that of Jhakar with a best effort of 70.37m on the day. That mark would be enough for a silver for the 18-year-old from Punjab, ahead of Nitesh Punia who claimed bronze with a best effort of 68.27m.

The day would see another meet record being set in the U20 women’s 5000m race. Punjab’s Suman Rani ran a time of 17:02:67 seconds to erase the old mark of 17:10:95 seconds set by Sanjivani Jadhav in 2015. In what was a fast-paced race, even the silver medallist Poonam Sonune went under Jadhav’s old mark. Sonune, of Maharashtra had earlier won the women’s 3000m race, and nearly made it two gold medals at the Federation Cup before eventually settling for second with a time of 17:03:30 seconds. Savita Pal of Assam took the final step of the podium with a time of 17:54:87 seconds.

Also matching an old meet record was pole vault athlete Dhirendra Kumar. The 19-year-old from Uttar Pradesh cleared a height of 4.80m to lie level in the record books with S Siva who managed the same effort in 2015. Anuj of Telangana and Yogesh Sakthivel of Tamil Nadu took silver and bronze with successful jumps at 4.50m and 4.40m respectively.

Sprinter Akash Kumar found some redemption in the U20 men’s 200m race. The 19-year-old from Uttar Pradesh was the defending national champion in the U20 100m race but was shocked by a national record setting performance by Gurvinder Singh in the second day of the competition. In the 200m final though, running in the absence of Singh, Kumar easily took gold clocking a time of 21.53 seconds. He beat Tamil Nadu’s Nitin Scidanandh who recorded a time of 21.95 seconds. Bronze went to Satnam Singh of Punjab, who clocked 21.98 seconds.