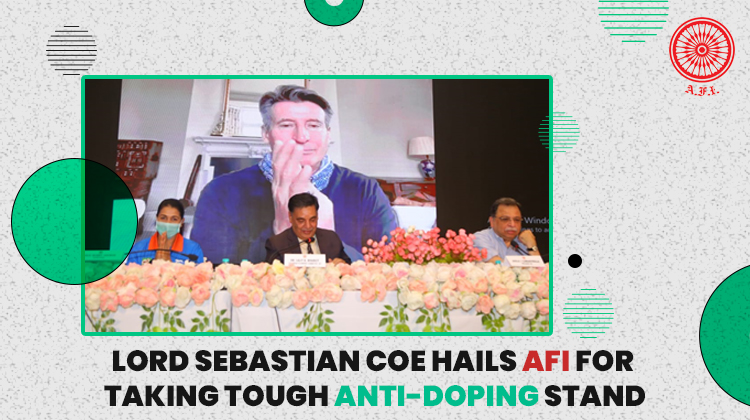 Gurgaon, November 1: World Athletics President Lord Sebastian Coe today appreciated Athletics Federation of India for its tough stand against doping, for improving its athletes performances in a number of events and for being in the forefront of keeping the sport active in these uncertain times.

Addressing the valedictory session of the AFI annual general meeting today via video conferencing from London, Lord Coe said he was absolutely delighted to see the progress that India is making internationally in its performances in not just one or two events but across the broad spectrum.

“Also, the tough stand that you are taking in doing everything you can to eradicate the scourge of doping,” the World Athletics President said. “These are challenging issues in challenging times. I am delighted that you, like many member federations of World Athletics, are not hiding from these challenges.”

He congratulated Olympians Adille J. Sumariwalla and Anju Bobby George for being elected unopposed as AFI President for the third successive term and Senior Vice President respectively. “It is my pleasure to welcome you back in your position, Adille,” he said, noting that the annual general meetings were important part of the calendar for any member federation.

Lord Coe said that despite huge uncertainties, World Athletics had done well in the traumatic months in the wake of the Covid-19 pandemic. “World Athletics has made some brave decisions in facing many challenges,” he said, adding that such bravery would not count if member federations did not back them. “AFI has played an essential role in these times.”

On the concluding day of the annual general meeting, all State Associations made presentations with a sharp focus on growing transparency and accountability for the development of the sport in their respective areas. AFI also resolved to make every effort to ensure that some competitions could be resumed soon when learning to adapt to the current uncertainties.