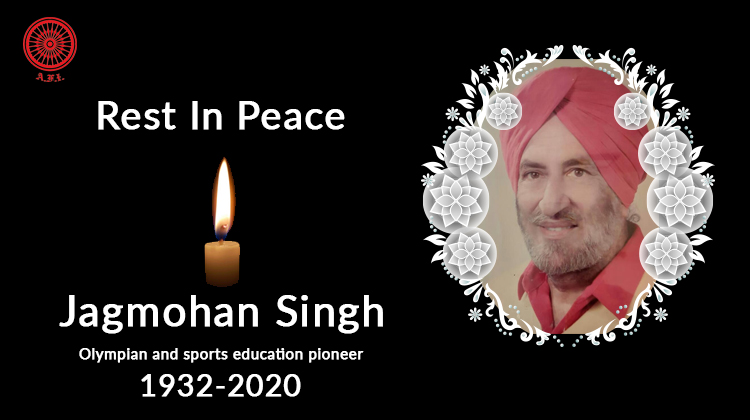 Athletics Federation of India today condoled the death of Olympian Jagmohan Singh, 88, a first generation sports educationist and a pioneer, in Patiala on Monday. A National Record holder in Decathlon and 110m hurdles, he took part in the hurdles event in the 1960 Olympic Games in Rome.

AFI President Adille J. Sumariwalla said the entire sports community, especially the track and field family, will mourn Jagmohan Singh’s death. “Coming within months after the passing of JS Saini earlier this year, Jagmohan Singh’s death leaves the athletics fraternity even poorer. He was always willing to share his vast knowledge and we will miss his wise counsel,” he said.

As a teenager, he made his presence felt first in the All-India Inter-Universities Meet with a record in the 100m hurdles in 1950. In 1953-54, he broke the National Record in Decathlon but the sprint-hurdles was his specialisation and he was the All-India Police Champion for a number of years, emerging National champion in 1958-59 and 1959-60 when he broke the National record.

A science graduate from the Government College, Ludhiana, Jagmohan Singh served Punjab Police from 1953 to 1962 when he joined NIS. Between 1963 and 1965, he studies sports coaching, physical fitness, sports conditioning and rehabilitation through exercise at University of Cologne in West Germany. He returned to serve NIS as one of its outstanding faculty members till his retirement in 1990.

He was the chief coach of the athletics team in the 1966 Commonwealth Games in Kingston, Jamaica. He trained sprinters and hurdlers in National camps till 1975 when, as Chief Coach, he masterminded the country’s success in the Asian Track and Field Championships in Seoul where the Indian team topped Japan on the medal tally.

He was listed among the country’s foremost sports academicians, having published a number of papers in Track Technique, a leading American journal devoted to technical articles. Besides, the Indian hockey team which finished second behind the host team in the 1973 World Cup in the Netherlands acknowledged his contribution towards its training in the run up to the tournament.