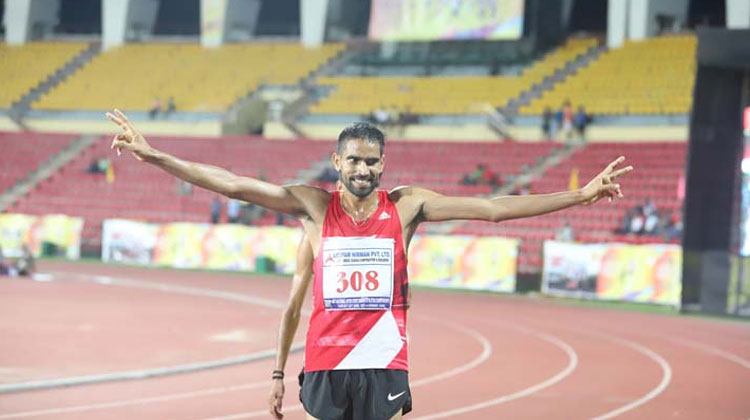 Guwahati. Meet records continued to tumble and athletes continued to earn places in the Indian squad for the 2018 Asian Games, at the 58th National Inter State Athletics Championships in Guwahati. Five athletes earned the right to represent India in Jakarta even as six meet records were set in the third day of competition at Guwahati’s Indira Gandhi stadium.

Javelin thrower Shiv Pal Singh became the latest Indian entrant to the 80m + club, winning a gold medal in the event at the 58th National Inter State Athletics Championships in Guwahati with a throw of 82.28m. The qualification guideline for the Asian Games was set at 81m by the Athletics Federation of India. The 23-year-old athlete from Uttar Pradesh also shattered the old meet record of 79.67m set by Jagdish Bishnoi in 2000.

Singh was trailing in second place with a best effort of 78.11m before flinging the spear to a personal best mark with his final throw of the competition. He beat out former national record holder Rajender Singh who settled for silver with a throw of 80.63m. Claiming bronze was Uttar Pradesh’s Amit Kumar who had been leading until the final round of throws, with a throw of 78.17m.

Also crossing the qualification guidelines for Asian Games was steeplechaser Sudha Singh. The former national record holder clocked 9.39.59 seconds to both erase her own old meet record of 9:45.60 seconds set in 2013 and also finish under the Asian Games qualifying standard of 9:45.00 seconds. Sudha was the comfortable winner at the Indira Gandhi Stadium, finishing more than 15 seconds clear of second place Chinta Yadav who clocked 9:55.41 seconds. Chavi Yadav made it an all Uttar Pradesh podium, becoming only the fourth Indian woman to finish inside 10 minutes, with a time of 9:56.73 seconds. The race would however prove to be disappointing for national record holder Lalita Babar who was making her return to competition after a year off the track. While Babar had been expected to resume her rivalry with Singh, she would fail to complete the race.

The men’s 3000m steeplechase event would also see an athlete earn the chance to represent the country at the Asian Games. Haryana’s Naveen Kumar Dagar went under the AFI’s qualifying guideline of 8:41.40 seconds as he crossed the finish line first with a time of 8:39.42 seconds. Dagar also broke his own meet record of 8:42.29 seconds set at the 2014 edition of the tournament. Shankar Lal Swamy of Rajasthan and Durga Bahadur of Uttar Pradesh took silver and bronze with times 8:43.52 seconds and 8:46.67 seconds respectively.

Another national record holder, Dutee Chand, shrugged off the disappointment of a defeat earlier in the competition to stamp her class on Thursday. Chand had been beaten to second place in the women’s 200m yesterday by home girl Hima Das, but marked herself out as the athlete to beat with a blistering time of 11.42 seconds in a heat of the women’s 100m sprint. The qualification guidelines for the event had stood at 11.67seconds.

High jumper Balasubramanya Chethan also managed to cross the qualification standard as he cleared a personal best of 2.25m in the men’s high jump competition. Chethan who made a massive 5cm improvement to his personal best, equalled the AFI’s qualifying guideline of 2.25m and also bettered the previous meet record of 2.23m set by Tejaswin Shankar at Guntur last year. Upcoming high jumper V Bharathi of Tamil Nadu cleared a creditable 2.21m to claim silver while Siddharth Yadav of Haryana clinched bronze with a jump of 2.19m.

Khyati Vakharia meanwhile endured a bittersweet moment on the podium in the women’s pole vault event. Although she managed to win gold and also equal her own meet record of 4.00m set in 2013, the 29-year-old from Karnataka fell short of the Asian Games qualifying standard of 4.10m. National record holder VS Surekha claimed silver with a best jump of 3.90m while Maria Jaison of Karnataka settled for bronze with a best effort of 3.70m.

The sixth and final meet record of the day would be set in the men’s 4x100m relay. The Tamil Nadu squad of S Rishwanth, Elakkiya Dasan, Manikanda Arumugam and Siva Kumar clocked 40.22 seconds to erase the old mark of 40.49 seconds set by the Kerala team in 2013.