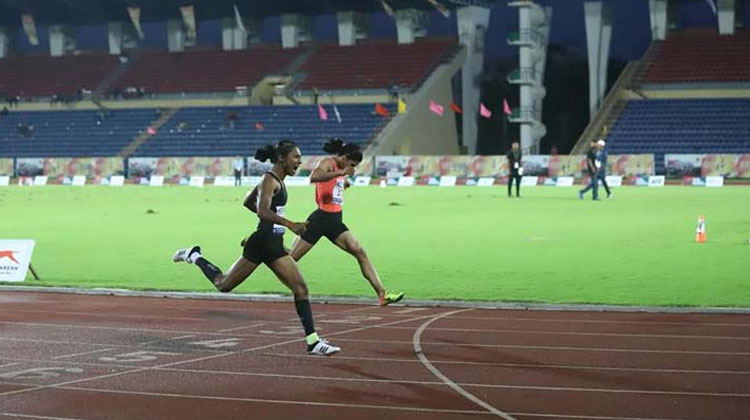 Guwahati. Hima Das claimed the bragging rights on the final day of the 58th National Inter State Athletics Championships by winning the marquee women’s 400m race in Guwahati on Friday.

The 18-year-old clocked 51.13 seconds to pip Haryana’s Nirmla Sheoran to the top of the podium at the Indira Gandhi Stadium.

Das, who had earlier won the 200m appeared to be in trouble with Sheoran having opened up a sizable lead at the final bend. Yet Das, running in lane 5 powered through the final stretch to catch up with Sheoran, running in lane 3, before pulling ahead in the final few meters of the race. Das’ time was a new personal best for her. Her previous best was a time of 51.32 seconds, that had seen her finish sixth at the Commonwealth Games. Das also set a new meet record, erasing the previous mark of 51.48 seconds set by Sheoran at the 2016 edition of the Championships. Sheoran meanwhile clocked 51.25m, just .03 seconds off her own personal best of 51.22 seconds. Prachi of Uttar Pradesh came third with a time of 52.96 seconds.

Other sprinters who crossed the qualifying standards set by AFI for Asian Games were Dutee Chand, in the women’s 100m and men’s 400m athlete Arokia Rajiv. Chand booked her spot for the quadrennial event in the morning session itself. Competing in the semifinal of her event, the 22-year-old from Odisha set the track ablaze with a new national record of 11.29 seconds. The AFI’s qualification guideline stood at 11.67 seconds. Chand erased the old national mark, which was also her previous personal best of 11.30 seconds set in New Delhi last year. Chand though couldn’t improve on her national record in the finals of the 100m, although her time of 11.32 seconds was more than enough to take gold. Finishing behind Chand was K Ranga of Manipur who clocked a credible 11.70 seconds while Karnataka’s Reena George claimed bronze with 11.77 seconds.

Arokia Rajiv meanwhile clocked a solid 45.78 seconds to finish under the AFI standard of 46.04 seconds. The 27-year-old from Tamil Nadu finished ahead of Kerala’s Kunhu Muhammad, who clocked 46.30 seconds and Karnataka’s Jeevan KS who took bronze with a time of 46.37 seconds.

Creating some happy headaches for the selectors were the top four athletes in the women’s 1500m, who all recorded times faster than the Asian Games qualifying standard of 4:16.88 seconds. PU Chitra of Kerala claimed the gold medal in 4:11.55 seconds, closely followed by 19-year-old Monika Choudhary of Uttar Pradesh who stopped the watch at 4:12.44 seconds. Jhuma Khatun of Uttar Pradesh claimed bronze with a time of 4:12.84 seconds while West Bengal’s Lili Das also finished inside the Asian Games standard with a time of 4:13.12 seconds.

Two more athletes would manage to clear the AFI’s qualification standards in the men’s triple jump. Arpinder Singh, cleared 17m after a gap of four years, winning the event with a jump of 17.09m. Also managing to get the better of the Asian Games standard of 16.62m was Kerala’s Rakesh Babu who cleared 16.63m to finish second. Mohamad Salahu of Tamil Nadu took bronze with a best effort of 16.32m.

Two heptathletes also managed to earn a call up for the Asian Games. With the qualifying standard set at 5400 points, Odisha’s Purnima Hembram, who took gold in Guwahati with 5898 points and West Bengal’s Swapna Barman who claimed a silver with a total of 5725 points managed to book their passage to Jakarta. Falling just short by six points was M Sowmya of Andhra Pradesh who tallied 5394 points.

There would be a touch of nerves for Jinson Johnson as he fell just short of the AFI guidelines in the men’s 1500 event. Johnson who broke the 42-year-old Indian record in the 800m just a couple of days ago, claimed gold in the 1500m with a time of 3:45.12 seconds. Johnson was just .12 seconds off the Asian Games standard of 3:45.00 seconds. Johnson finished ahead of Manjit Singh of Haryana who clocked 3:46.08 and Asian Championship gold medalist Ajay Kumar Saroj who clocked 3:46.91 seconds.

The selection committee will meet at 5pm tomorrow at AFI headquarters in Delhi to select the Indian team for the Asian Games 2018.