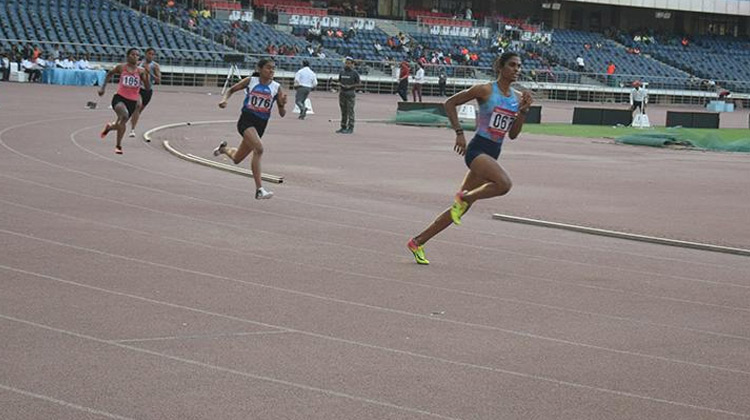 New Delhi: Eighteen-year old Jisna Mathew from Kerela bagged the yellow medal with the timing of 52.65s in the women’s 400 meters event at the last and final leg of Indian Grand Prix 2017 athletics series that concluded at the Jawaharlal Nehru Stadium on Monday, May 15, 2017.

All eyes were on Jisna and Karnataka athlete Poovamma Raju’s contest in the final leg as Keralite has lost to Poovamma in a photo finish with just 0.01s difference in the second leg of IGP, five days ago.
Today, Povamma followed Jisna to clinch the silver with the timing of 52.73s and Debashree Mazumdar (53.69s) won the bronze medal.

In Men’s 110m Hurdles, Akhil who hails from Kerala bagged the gold medal clocking 14.44s. He was followed by Tamil Nadu’s T.Balamurugan with 14.58s and Kerala’s Sreekanth with 14.82s won the silver and bronze medals respectively.

Purnima Hembram from Orissa who seized the gold medal clocking 13.85s in the IGP leg-1 at Patiala, a week ago added another gold medal to her account in the Women’s 100m Hurdles by bettering her performance to 13.79s. The twin sister’s from Kerala-Liksy Joseph (14.69s) and Niksy Joseph (14.83s) followed Purnima to bag the silver and bronze medals respectively.

Chandigarh’s Husandeep Singh emerged as the winner with 10.69s to clinch the gold medal in Men’s 100m sprint followed by Safikul Mondal(10.76s) at second position and Mohammed Sadath(10.82s) who settled for bronze medal.

Dutee Chand of Odisha secured gold medal once again in the Women’s 100m event with the timing of 11.30s. Merlin Joseph(11.72s) and Himanshree Roy(11.95s) secured the second and third positions.