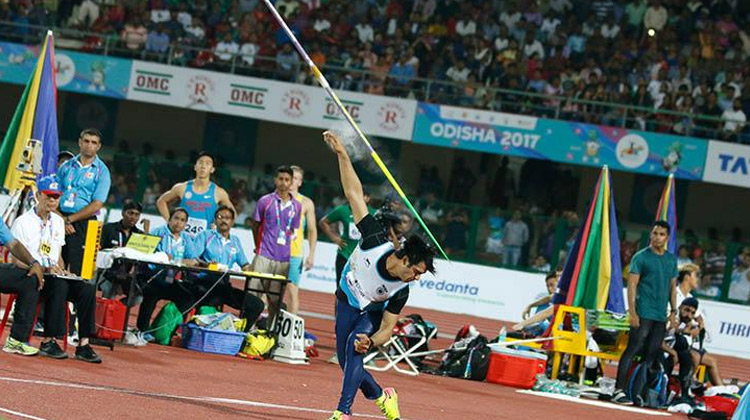 Patiala: Javelin throw national record holder Neeraj Chopra will be the star performer in action at the Run Adam Indian Grand Prix-1 (Run Adam IGP) to be held in the National Institute of Sport in Patiala on Tuesday. Chopra though will only be one of a total of 129 competitors for whom the prestigious one day event essentially marks the beginning of the Indian domestic calendar.

For the athletes, the eventual goal is to match the qualifying standards for the Commonwealth Games. While the Run Adam IGP will likely serve as a warm up event ahead of the Federation Cup in early March, the high quality of the field could well spring up a few surprises.

For Chopra the tournament will be a first competition since his return from Offenburg in Germany, where the 20-year-old had been training with Werner Daniels. After a three month stint, Chopra has since returned to the national camp in Patiala where he has resumed training with former world record holder Uwe Hohn.

While this is the first domestic tournament, several of the athletes are in strong form, having competed in prior international events. 100m sprinter Elakiya Dasan is fresh off a bronze medal at the Asian Indoor Championships in Tehran in January and subsequently another bronze at the Asian Games Test event in Jakarta. In the latter event he had clocked 10.31 seconds which is the fastest time run by an Indian outside India. He will be challenged by Amiya Mallick who holds the national record in the 100m of 10.26 seconds. Mallick, who has been training in the USA for the past one month has set his target as qualifying for the Commonwealth Games.

Other athletes to watch out for are long jumper Nayana James, who claimed a silver medal at the Asian Indoor Championships and a bronze at the Asian Championship, shot putter Tejinder Pal Toor who won a silver at Bhubaneshwar and national record holder and defending Asian quarter mile champion Mohammad Anas.

Amongst the youngsters to keep an eye on is 18-year-old Hima Das who clocked an impressive personal best of 23.59 seconds in the women’s 200m at the Asian Games. The time was the second fastest by a U-20 athlete this year. While Das will only be running in the 100m in Patiala, she would be keen to make a mark at that event too.

Due to fewer entries in women’s shot put and discus throw and men’s high jump, these events have been dropped from the competition.