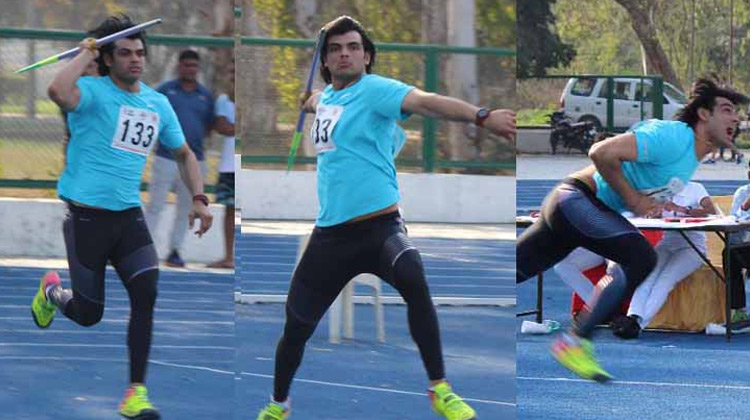 Patiala. Javelin thrower Neeraj Chopra made a return to domestic competition with a strong performances to claim gold at the Run Adam Indian Grand Prix-1. Chopra threw the spear a distance of 82.88m at the National Institute of Sport in Patiala on Tuesday to finish ahead of Vipin Kasana who managed a best throw of 80.04m. Amit Kumar took bronze with a best of 77.33m. It was a much anticipated result for Chopra, who was taking part in his first competition since his return from Offenburg in Germany, where the 20-year-old had been training with Werner Daniels. After a three month stint, Chopra has since returned to the national camp in Patiala where he has resumed training with former world record holder Uwe Hohn.

Chopra was not the only athlete to impress though. Shot Putter Tajinder Pal Toor claimed gold in the men’s shot put with a best throw of 19.95m. While Tajinder has a personal best of 20.40m, recorded at the same venue in June last year, his throw on Tuesday was credible coming as early as it did in the season. Toor, improved on 19.77m he threw to claim a silver at the Asian Indoor Championships in Tehran in January this year. Toor finished ahead of Naveen Chikkara who threw the put 19.08m while the bronze went to Paramjeet Singh who only managed 16.74m.

James, carried on from the form that saw her winning silver at the Asian Indoor Championships by claiming gold in Patiala with a best jump of 6.47m. She finished ahead of Nina Pinto who cleared 6.41m. Purnima Hembram also managed to step on the podium with a best effort of 5.99m.

Also coming close to the qualifying guideline was triple jumper Rakesh Babu. The Kerala jumper managed a best of 16.59m on Tuesday coming a centimeter short of the AFI standard of 16.60m. Babu’s effort however was good enough to win gold, edging Commonwealth bronze medalist Arpinder Singh who managed a best of 16.45m. National record holder Renjith Maheshwary finished third with a jump of 16.09m.

Amongst the other bright performers of the day were MP Jabir who claimed the 400m hurdles gold with a time of 50.60seconds, just shy of his personal best of 50.22m. Jabir finished ahead of Santhosh Kumar (50.85 seconds) and Binu Jose (52.77seconds). Upcoming triple jumper Renu produced a mini upset on the day. Renu jump of 13.26m was enough to pip the 13.08m effort of NV Sheena, a silver medalist at last months Asian Indoor Championships in Tehran. 18-year-old Hima Das too gave a strong account of herself with a personal best timing of 11.74 seconds in the women’s 100m race. Das took silver behind gold medalist Dutee Chand who clocked 11.57 seconds.