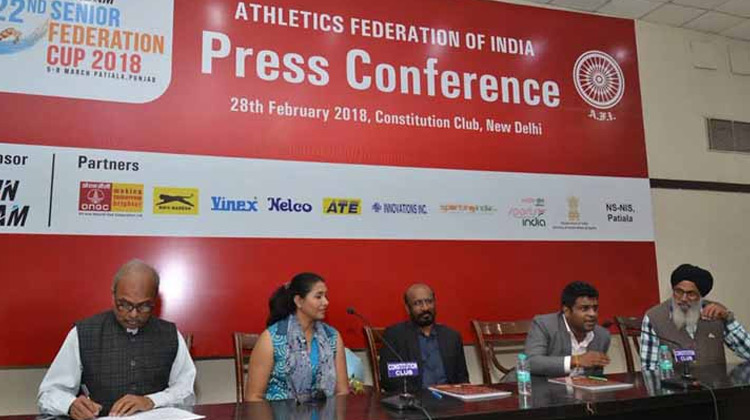 New Delhi, 28th February, 2018 : Athletics Federation of India (AFI) today announced association with Chennai-based Run Adam, a sporting talent app with a vision to help realise the dreams of athletes as Title Sponsor for the 22nd Federation Cup Sr. National Athletic Championships 2018 which will be held from 5th to 8th March 2018 at NIS-NS, Patiala. This competition will serve as the final qualification trials for the 21st Commonwealth Games to be held at Gold Coast, Australia from 4th to 15th April 2018.

The announcement was made in the presence of Ms. Anju Bobby George (Olympian).

Speaking about the association with Run Adam Mr. CK. Valson, AFI Secretary said “India is abundant with sporting talent, associating with Run Adam who shares our vision to promote sporting talents will position India, a sporting giant in the international arena. This 22nd Federation cup which will be held from 5th to 8th March will set the tone for 21st Commonwealth Games to be held in Australia. Our association will be an important milestone in Indian sporting history. I welcome Run Adam for establishing such sporting eco system which encourages athletes for the preparation in international events”.

Speaking on the association with Athletic Federation of India Mr. K. Yeragaselvan, CEO and MD of Run Adam, an avid sports enthusiast himself said “It gives us immense pleasure in associating with Athletics Federation of India in this 22nd Federation Cup Sr. National Athletic Championships 2018. Since it will serve as the final qualification trials for the 21st Commonwealth Games to be held in Australia it will be a dream for every athlete to represent our country in the international arena. Run Adam’s vision is to bring the country’s sporting ecosystem under one umbrella to help solve the biggest challenges facing sporting talent”.

Anju Bobby George said, “It is really good for athletics that Run Adam has come forward to support Federation Cup. India is full of talent and such partnerships will help their development. We are expecting a very good competition in Patiala as it will be the qualifiers for the Commonwealth Games.”

More than 700 athletes, men and women, are expected to compete in the five-day competition.

About Run Adam: Run Adam is an analytics-based sporting platform that empowers promising athletes, hand-holding them through every stage of their career. A 360-degree marketplace for sporting talent, Run Adam connects athletes to the sports ecosystem that can help them perform and excel. For more information, please visit www.runadam.com