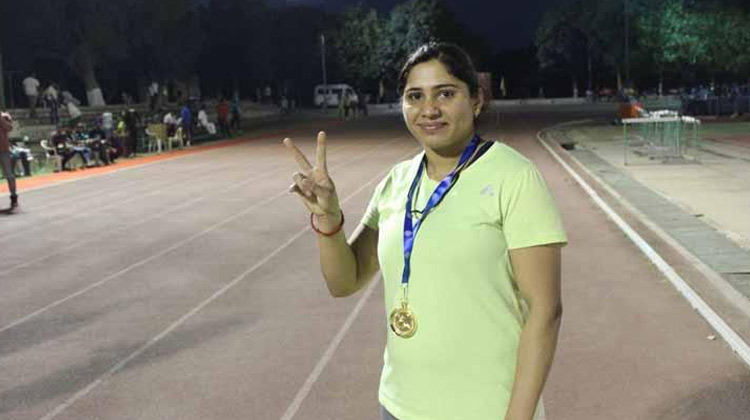 Patiala: Sarita Singh of Uttar Pradesh set a new national record in the women’s hammer throw with a throw of 65.25m to claim the gold medal at the 21st Federation Cup National Senior Athletics Championships at the NS-NIS athletics ground in Patiala.

R Anu of Kerala broke a 15-year old meet record even as she won the women’s 400m hurdles event on the opening day of the 21st Federation Cup National Senior Athletics Championships in Patiala on Thursday.

Anu recorded a time of 57.39 seconds to shatter the old mark, of set by ShahebaniOram in Chennai in 2002. Running in lane five, Anu was challenged all the way to the finish by Odisha’s JaunaMurmu in lane four, who also ran under the old meet record, clocking a time of 57.51 seconds. Arpitha M of Karnataka took bronze after recording a time of 57.64 seconds.

The result was also a personal best for Anu, bettering her previous mark of 57.79seconds recorded two years back at the 2015 Asian Championships. Anu had finished fourth in that competition and the 23-year-old said she was looking to build on her performance in the Federation cup and improve on the performance at the 2017 edition of the Asian Championships to be held in Bhubaneshwar in August.

Anu wasn’t the only athlete to write her name in the record books – a new mark was set in the women’s shot put as well. National record holder Manpreet Kaur of Punjab threw the shot a distance of 17.04m to smash the previous mark of 16.94 set by Harbans Kaur in Chennai in 1997. Kaur dominated the field, finishing over two meters ahead of her nearest rival, Ramanpreet of Punjab who had a best throw of 14.90m. Anamika Das of West Bengal took bronze with a throw of 14.67m. Despite her convincing win, Kaur was not satisfied with her performance. “I was expecting to cross 18m in the competition. I was trying to match my personal best,” says Kaur who set the national record of 18.86m at the Asian Grand Prix in April this year at Jinhua, China.

Earlier in the morning session, L Suriya and her brother G Lakshmanan each won their third straight gold medal in the women’s and men’s 5000m event of the Federation Cup. Suriya won the women’s race with a time of 15:54.78seconds to finish ahead of Sanjivani Jadhav (15:59:54seconds )and Monika Athare (16:44.16seconds) each of Maharashtra. Lakshmanan meanwhile won his event with a time of 14:02.90 seconds, ahead of Gujarat’s Murli Kumar Gavit (14:05:04 seconds) and Uttarakhand’s Suresh Kumar (14:06.11 seconds).