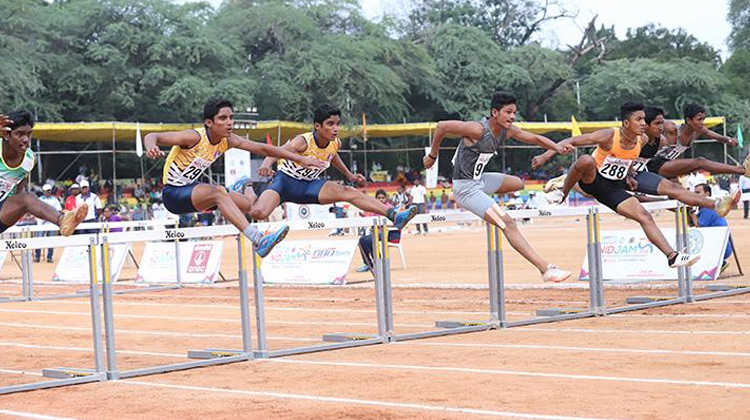 Tirupati (AP). Records continued to tumble on the final day of the National Inter District Junior Athletics Meet that concluded in the city of Tirupati in Andhra Pradesh on Monday. Seven new meet records were set at the Tarakarama Stadium in SV University after five were set on the second day of competition on Sunday.

Sneha Malik who was representing Rohtak district in Haryana shaved over two seconds off the existing meet record in the 1000 m run in the U-16 girls category. Malik clocked a time of 3:00:95 to erase the previous meet record of 3:03:08 set by Ritu Kumari of Dhanbad, Jharkhand at the 2013 edition of the NIDJAM. Coming in second place was Shraddha Hake of Solapur, Maharashtra who recorded a time of 3:03.28 seconds. The bronze medal was claimed by Bhagya Lakshmi of Nagakurnool, Telengana who crossed the finish line in 3:06:77 seconds.

Asha Kiran Barla also wrote her name into the record books. The 12-year-old athlete from Ranchi district in Jharkhand stopped the clock at 1:38:01 seconds to claim the gold medal in the U-14 girls 600m race. She finished over a second clear of the previous meet record of 1:39:12 seconds set two years ago at the Vishakapatnam edition of the NIDJAM. Barla was followed on the podium by Moumita Roy of North 24 Parganas in West Bengal. Roy finished a distant second clocking a time of 1:44:97 seconds. The bronze medal was secured by Ekta Dey of Bhopal district, MP who finished with a time of 1:45:18 seconds.

It took a meet record for Sandeep Kumar to win a gold medal in the U-16 boys high jump. Kumar, representing Unnao district in Uttar Pradesh cleared a height of 1.93m to edge out Kushal Mohite and Kaushik Jadhav who were representing Satara Maharashtra and Botad district in Gujarat respectively. Mohite and Jadhav both cleared identical heights of 1.89m with the Maharashtra jumper taking the silver medal by virtue of making fewer failed jumps.

Meet records were also made in the course of determining the fastest 14 year old athletes in the country. The boys U-14 100m race was won by Dhiraj Kumar Pahadi of Dhanbad district, Jharkhand wo clocked a time of 11.19 seconds. He erased the previous meet record of 11.26 seconds set last year at Vishakapatnam. He was closely followed by Mukesh Kumar of Hazaribagh district of Jharkhand and Ravi Kushwaha of Gorakhpur, Uttar Pradesh who clocked times of 11.50 seconds and 11.67 seconds respectively.

Aniket Chaudhary and Rithika R were the other two athletes to set meet records, setting new marks in the 200m race in the boys U-16 category and the 100m hurdles race in the girls U-16 category respectively. Chaudhary clocked a time of 22.62 seconds to erase the previous mark of 22.79 seconds set last year at Visakhaptnam. Rithika meanwhile crossed the finish line in 14.78 seconds to eclipse the previous meet record of 15.09 seconds set last year.

Organised by Andhra Pradesh Government with the support of local administration, the Tirupati edition of AFI’s annual mega event witnessed participation of more than 4200 junior athletes from 436 districts of the country. More than 5000 officials were deployed by the local organising committee to support the needs of the athletes. Bengaluru based NEB Sports sponsored the travel of all the athletes and the coaches.