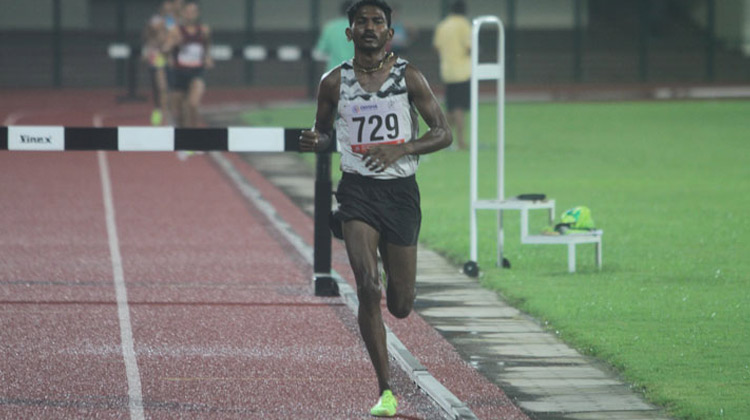 Bhubaneswar (Odisha). Avinash Sable ended the 58th Open National athletics Championships with a new national record erasing the 37-year-old mark in the men’s 3000m steeplechase. Sabale representing Serivices clocked 8:29.80 seconds at the Kalinga Stadium on Friday to go past the old mark of 8:30.88 seconds recorded by Gopal Saini in Tokyo in 1981.

Sable was far ahead of the rest of the field. The 24-year-old beat out Services teammate Rakesh Kumar Swami who clocked a time of 8:47.31 seconds. Making it an all Services podium was Durga Bahadur Budha who recorded a time of 8:48.29 seconds.

Another star performer of the competition was Services sprinter Sanjit who added the 200m title to the 100m gold he had won earlier in the competition. Sanjit clocked a time of 21.30 seconds to finish well clear of Punjab’s Gurlal Singh who clocked a time of 21.66 seconds. K Ashok of Services finished with a bronze medal after clocking an identical time of 21.66 seconds but was lost out on a silver medal by virtue of a photo finish.

Meanwhile Asian Games medalists Arpinder Singh and Dharun Ayyasamy lived up to their reputations at the competitions, winning their respective events.

Singh who had become the first Indian triple jumper to claim a gold medal at the Asian Games when he won his event in Jakarta and then a bronze medal at the Continental Cup earlier this month added the Open national gold to his kitty. ONGC athlete Singh was well short of his personal best of 17.17m but his best effort of 16.62m in his second jump of the competition was more than enough beat Arivu Selvam of Services and Navjot Singh of Punjab who jumped 16.22m and 16.06m respectively.

Asian Games silver medalist Dharun Ayyasamy also lived up to his reputation at the 58th Open National Championships setting a new meet record on the way to winning a gold medal in the men’s 400m hurdles event. ONGC athlete Ayyasamy clocked 49.67 seconds to erase the old mark of 50.16 seconds set by Santhosh Kumar at the 2017 edition of the tournament. In a fast-paced race, Ayyasamy beat Services runner MP Jabir who also went under the old meet record with a time of 50.02 seconds. Railways’ Jashanjot Singh claimed the bronze medal after clocking a time of 50.25 seconds. Last year’s winner and the meet record holder Santhosh Kumar finished outside the podium after finishing fourth with a time of 50.53 seconds.

In the absence of star thrower Neeraj Kumar, the gold medal in the men’s javelin throw went at a relatively short distance of 76.42m. That throw was recorded by Abhishek Singh of Services. Uttar Pradesh’s Vipin Kasana took silver with a best throw of 76.05m while Sahil Silwal took third place with a throw of 75.38 m.