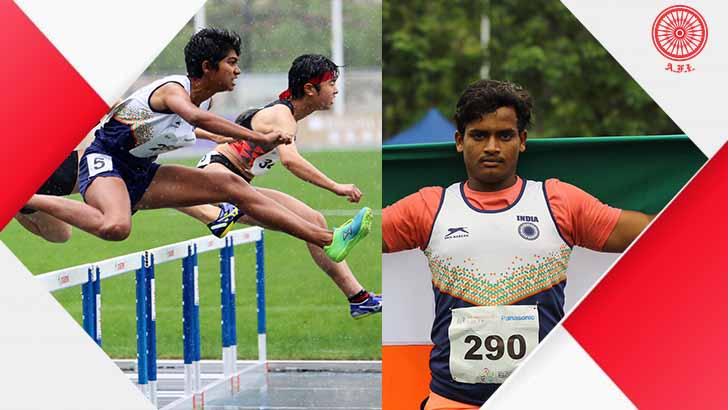 India finished the opening day at the 3rd Asian Youth Athletics Championships with 2 Golds, 1 Silver and 3 Bronze Medals. Thabitha P.M of India ran girl’s 100m Hurdles in 13.86s to secure the first gold medal for India in the championship. The silver and bronze medal went to the Japan’s Mayuko Iwasa (14.03s) and Xinyu Liu (14.44s) of China respectively.

In boy’s hammer throw final, Vipin Kumar threw 69.00m in his first attempt to claim an early lead in the competition. He maintained the lead through out and with an effort of 69.63m in his final attempt secured the second gold medal for India. Chinese athlete Yanfeng Fan and Iran’s Sahand Noor bagged silver and bronze medal with throws of 66.64m and 65.85m respectively.

In girl’s hammer throw, Harshita Sehrawat threw the iron ball to 61.93m distance and grabbed a silver medal while Deepak Yadav cleared a height of 4.70m in pole vault to win a bronze medal for India.

Earlier in the morning session, Ajay opened the medal account for India with a bronze medal in 1500m event. He clocked 3:57.25 to win the first medal for the country. In the same event Harendra kumar finished fourth with a timing of 3:57.55.