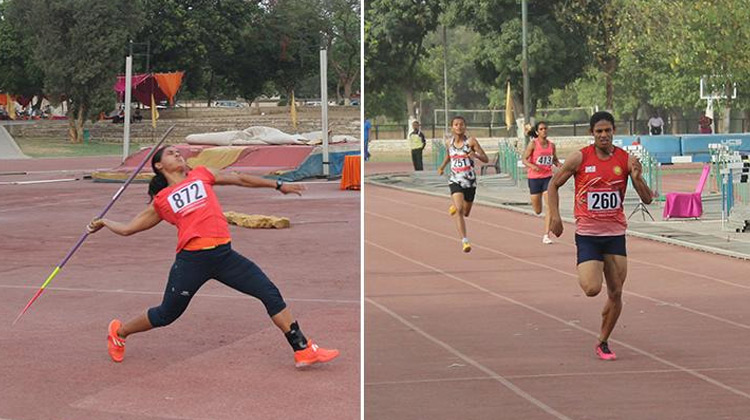 Patiala: Javelin thrower Anu Rani was the star performer of the the 21st Federation Cup National Senior Athletics Championships, throwing the spear 61.86m to break her own national record of 60.01m in the last event of the comeptition. In the process Rani, representing Uttar Pradesh in Patiala, qualified for the World Championships in London, the qualifying mark for which was set at 61.40m. Suman Devi, also of Uttar Pradesh took silver with 55.03m while K Rashmi of Karnataka took bronze with 51.12m.

Nirmala Devi of Haryana smashed a new meet record in the women’s 400m and in the process qualified for the World Championships. Nirmala, who competed at the 2016 Olympics clocked a time of 51.28 seconds to finish inside the world Championships qualifying mark of 52.10 seconds and also the old meet record of KM Beenamol, of 51.81seconds set in 2002. MR Poovama of Karnataka came a distant second in 52.70 seconds while Debashree Mazumdar of West Bengal claimed bronze in 53.59seconds. “I was expecting to make a national record here but I am satisfied with the meet record. I will target the national record at the Asian Championships,” said Nirmala.

It was a day of double delight as four athletes took home their second gold of the tournament on Sunday. G Lakshmanan and his sister L Suriya added the 10000m crowns to the 5000m titles they had won on the first day of the competition. They were joined by Nayana James who claimed the women’s 100m hurdles gold to go along with her long jump title earlier in the competition. The highlight of the double act was Amoj Jacob, only 19, who completed a 400-800m double when he won men’s single lap race. Jacob, a student of New Delhi’s Khalsa college, ran a personal best time of 46.26m to claim the 400m men’s title. He edged Arokia Rajiv of Tamil Nadu who clocked 46.64m and Sachin Roby of Kerala, who took bronze, with a time of 46.87seconds.

Tamil Nadu’s Lakshmanan claimed the men’s 10000m gold with a time of 29:23.46seconds. He finished ahead of Kerala’s Gopi Thonakal who clocked 29:55.67seconds and KalidasHirave who took bronze for Maharashtra with a time of 29:57.94seconds. “It is my season’s best timing. I wwas hoping to finish under 29 minutes but I am happy with the effort as it came in very hot conditions,” said Lakshmanan, who has been unbeaten in India since 2013. Sister L Suriya had earlier claimed the women’s crown with a time of 33.12.67 seconds. She finished ahead of Maharashtra’s Sanjivani Jadhav who clocked 33.15.77seconds while Delhi’s Meenu finished third in 34:17.11 seconds.

Nayana James meanwhile completed her dream debut in the Federation Cup with her victory in the hurdles. The 22-year-old who is representing Andhra Pradesh, clocked 13.96seconds to pip Ankita Gosavi of Maharashtra (14.00seconds) and Prajna Prakash (14.03 seconds) of Karnataka. “This is my first year of senior competition. I have jumped my personal best and now I have run my personal best time in the hurdles too,” she said

Prem Kumar of Telengana won the men’s 110m hurdles, crossing the finish line in 14.34seconds. He finished ahead of Suresh and T Balamurugan, both of Tamil Nadu. Suresh clocked 14.35seconds while Balamurugan claimed bronze with a time of 14.52 seconds. “Over the last few months it has been difficult for me because I have a full time job with the Income Tax department. So I have to balance my training along with my work which is hard,” said Kumar.

Dutee Chand and Amiya Mallick became the fastest men and women of the meet when they won the women and men’s 100m sprint on Sunday. Chand clocked 11.48seconds to exact revenge on Orissa statemateSrabani Nanda who had earlier beaten her in the 200m contest. Nanda finished second with a time of 11.57seconds. Merlin K Joseph of Kerala took bronze with a time of 11.68 seconds. Odisha’s Amiya meanwhile completed a sprint double adding the 100m title to the 200m he had won earlier. He clocked 10.51 seconds to finish ahead of JyotisankarDebnath of Andhra Pradesh who finished in 10.57 seconds. Anuroop John of Kerala ran 10.60seconds to claim bronze.

In a surprise result 21-year-old Kamalpreet Kaur Bal of Punjab upset Rio Olympian Seema Punia in the women’s discus throw event. Bal recorded a best throw of 54.33m to finish ahead of Seema Punia, who was competing in her first event following the Olympics. Punia, representing Punjab, had a best effort of 53.86m. Himani Singh of Uttar Pradesh completed the podium with an effort of 43.24m.