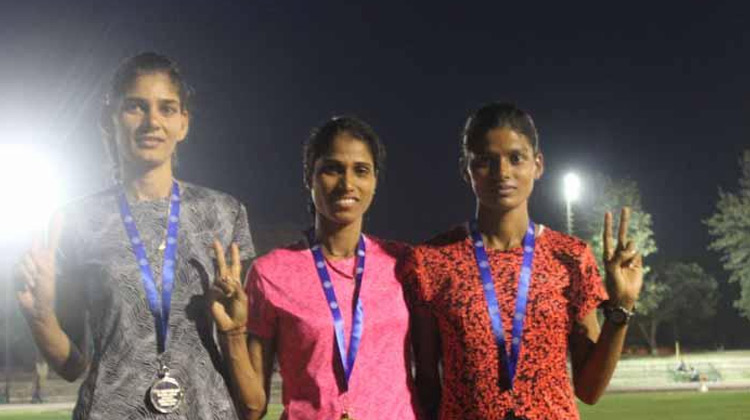 03 June 2017 : Patiala: Competing in her first tournament since the Rio Olympics, Sudha Singh claimed a gold medal in the women’s 3000m steeplechase on the third day of the 21st Federation Cup National Senior Athletics Championships with a time of 10:03.01 seconds. Singh finished over a hundred meters ahead of Uttar Pradesh statement Parul Chaudhary who clocked a time of 10:18.10 seconds. Uttar Pradesh athletes would make make it three out of three on the podium as Chinta Yadav claimed bronze with a time of 10:21.20 seconds. In the men’s event, it was Naveen Kumar of Haryana who took gold with a time of 8:50.85 seconds. Kumar finished ahead of Durga Bahadur Budha (8:52.81seconds) of Uttarakhand and Jaiveer Singh (8:57.72 seconds) of Haryana.

B Chethan claimed the men’s high jump, requiring fewer jumps to clear 2.18m as compared to Ajay Kumar of Haryana who took silver. SarveshKushare of Maharashtra claimed bronze with a best effort of 2.13m. “It is a very important medal for me,” said Chethan. “I got a new coach in GV Gaonkar a year and a half back and the results have shown. My next Target will be to beat the national record of 2.26m,” he said. National record holder Tejaswin Shankar had to be satisfied with fifth place with a best jump of 2.10m. Shankar, however was satisfied with his performance considering he is making his comeback from a back injury.
KM Sangeeta of Uttar Pradesh clinched gold in the women’s pole vault, clearing a height of 3.70m. She was followed by KC Dija and Mariya Jaison, both from Kerala. The two statemates had cleared 3.60 with Dija taking silver by virtue of requiring fewer jumps. In the women’s triple jump, N V Sheena of Kerala took the gold with a best jump of 13.31m. She was followed on the podium by Joyline Mural Lobo, representing Karnataka who jumped a distance of 12.99m. Bhairabi Roy of West Bengal claimed bronze with a best effort of 12.92m.

In the throws event Dharamraj Yadav of Uttar Pradesh missed out on a meet record (59.55m), but his effort of 58.32m was enough to clinch gold. He finished ahead of Kirpal Singh (55.43m) and Baljinder Singh (54.23m) both from Punjab.

In the morning session, Sandeep Kumar, who competed at the 2016 Rio Olympics in the 50km category, clinched a gold medal in the 20km race walk competition. While Kumar, representing Haryana has a personal best timing of 1:20:44 seconds, he was able to clinch the title at the Federation cup with a time of 1:27.43.28 seconds. He finished ahead of Sunil Rathee of Haryana who clocked 1:27.49.39 seconds and Chandan Singh of Uttarakhand who crossed the finish line in 1:28.28.14 seconds. Despite the relatively slow race, Kumar was satisfied with the win. “I was only told a few days ago by my coach that I was taking part in the 20km event. I am currently preparing to take part in the 50km event at the London World Championships,” said the Army racewalker.