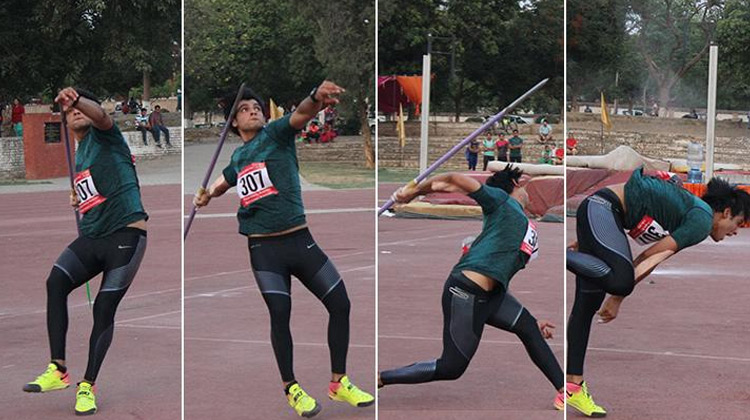 02 Jun. 17,Patiala : A thrilling contest between Neeraj Chopra and Davinder Singh in the men’s javelin throw was the highlight of the second day of the Federation Cup National Senior Athletics Championships at NS-NIS in Patiala on Friday, 02 June 2017.

Both athletes had already qualified for the World Championships but it was Neeraj Chopra who took the honours on Friday with a throw of 85.63m. Neeraj’s effort, a new meet record eclipsing Devender Singh’s mark of 79.65m recorded in Mangalore in 2015, put him in the top ten list of javelin throwers this season. Davinder Singh finished second with a best effort of 83.82 m, while Abhishek Singh of Uttar Pradesh threw the spear 77.00 m to claim bronze.

Another high level performance was recorded by Tejinder Pal Singh, who won the men’s shot put event with a throw of 20.40m, just 10 centimetres away from qualification to the World Championships. He finished ahead of Jasdeep Singh Dhillon who picked up silver with a throw of 19.46m while national record holder OP Karhana took bronze with an effort of 19.30m.

Competing in the year’s first 200m competition of the domestic calender, Amiya Mallick and Srabani Nanda, both of Odisha claimed the men and women’s titles respectively. Mallick recorded a time of 21.22seconds while Nanda clocked 23.57seconds. Mallick who was competing in his first 200m competition since the 2013 Open Nationals, finished ahead of Sanjeet of Haryana (21.43 seconds) and Vamsi Praveen of Andhra Pradesh (21.78seconds). In the women’s competition, Nanda finished ahead of statemate and fellow Olympian Duttee Chand (23.60seconds) and Jyoti HM of Karnataka (24.37seconds).

In the middle distance events, Delhi’s Amoj Jacob was the surprise winner of the men’s 800m. The second-year student of Delhi’s Khalsa college took his first gold medal of the Federation Cup with a time of 1:50.54seconds. Rio Olympian Jinson Johnson of Kerala took silver in 1:50.83 seconds while VishwambharKolekar of Karnataka completed the podium with a time of 1:50.92seconds. The women’s event saw Archana Adhav of Maharashtra clock 2:05.66 seconds to claim gold while silver and bronze went to West Bengal’s Lili Das (2:05.93 seconds) and GK Vijayakumari (2:07.37seconds) of Karnataka.

Andhra Pradesh’s Nayana James won the women’s long jump with a best effort of 6.55m while V Neena of Kerala (6.31m) and G Karthika of Tamil Nadu rounded off the podium with an effort of 6.05m. National record holder Ankit Sharma of Madhya Pradesh claimed the top prize in the men’s event with a time of 7.80m ahead of S Samsheer (7.67m) and Mohan Naik (7.66) both of Karnataka.

Earlier in the morning session, Punjab’s Karamjit Kaur won her first Federation Cup title in the women’s 20km walk with a time of 1:40:01.68seconds. Soumya B of Delhi and Rani Yadav of Uttar Pradesh won silver and bronze with a time of 1:41:03.16 seconds and 1:42:22.32seconds. Karamjit thus joined her sister and national record holder Khushbir Kaur who has previously won the Federation Cup title. “I am satisfied with my result. This is my personal best effort,” said Karamjit. National coach Alexander Artsyabashev was also satisfied with the result despite it being nearly three minutes off the meet mark held by Khushbir Kaur in 2012. “This is a good result considering the temperature and the fact this this is our developmental squad. Our main team is currently training at the high-altitude center in Dharamsala with the target of performing at the World Championships in London,” said Alexander Artsyabashev.