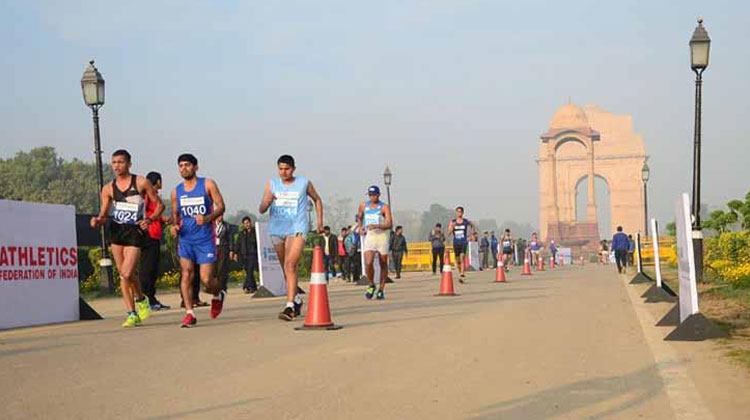 After a long and complex phase of planning, today the Athletics Federation of India (AFI) along with its sponsor Max Bupa Health Insurance and our new partners Meraki Sport & Entertainment, delivered a spectacular National Race Walking Championship in Delhi.

This year, it was the fourth edition of the championships and it was titled as Max Bupa Race Walking Championships 2017 after Max Bupa decided to club their annual multi-city event ‘Walk for Health’ event with National Championships to support Race Walking in India and above all, to support our national-level elite athletes. This collaboration between AFI and Max Bupa is a result of efforts put in by Meraki Sport & Entertainment to take the Race Walking discipline of Athletics to newer heights in the country.

As Indian athletes are continuously improving in Race Walking discipline and are now among the best in Asia, this partnership will provide the much-needed boost to our athletes as they prepare for Tokyo 2020. Last year in Nomi city of Japan, Gurmeet Singh created history by becoming the first Indian to win 20km Men’s Asian Championships gold medal with the timing of 01:20:29. After Gurmeet, Manish Rawat did the country proud by securing a creditable 13th position at the 2016 Rio Olympics where start-list comprised of world’s best 74 walkers.

While Sandeep stole the limelight at Max Bupa National Championships on a pleasant Saturday morning by improving his national record clocking 03:55.59 and clinched the gold medal of the 50km RW, Jitender Singh (04:02:11) and Chandan Singh (04:04:18) who finished second and third, respectively, also beat the London World Championships 2017 qualifying mark of 04:06:00. Sandeep’s previous best was 03:56:22, a national record he created in 2014.

In 20km Men’s RW, Olympian KT Irfan clocked 1:22:43 and grabbed the gold medal while Devender (01:22:43) settled for silver and K. Ganapati clinched the bronze medal (01:22:57). All three athletes in this category also qualified for the World Championships.

In Women’s 20km RW event, Priyanka Goswami, who currently ranks third in the list of top women RW’s of India, won the gold with a timing of 01:37.58.32 while Shanti Kumari (01:38:38) and Rani Yadav (01:38:51) bagged the silver and bronze, respectively. However, all three athletes failed to beat the World Championships qualification mark of 01:36:00.

The other highlight of the 2017 Nationals was staging of Juniors 10km Men’s & Women’s RW at the iconic India Gate on Sunday, 19 February 2017. More than 10,000 participants of Max Bupa’s ‘Walk for Health’ walkathon cheered for India’s upcoming Race Walkers as they crossed the national junior athletes around India Gate. For the first time in national championships, top-five finishers in each category were awarded cash prizes by Max Bupa at a grand ceremony held at Major Dhyanchandra Stadium after the Junior event.

The winners of all categories were awarded by Adille J Sumariwalla, President- AFI, and Ashish Mehrotra, CEO- Max Bupa.