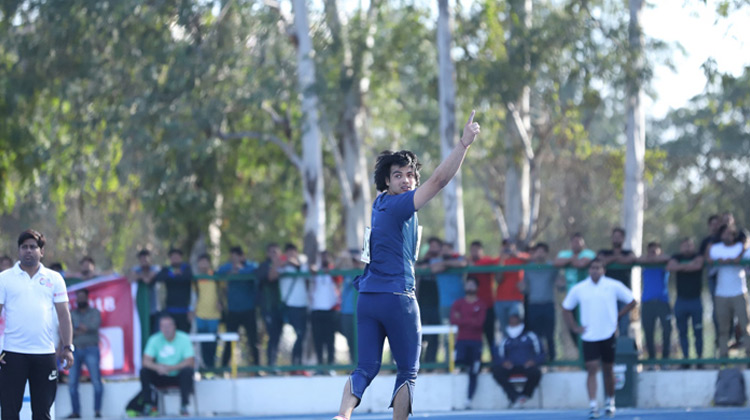 Gold Coast (Australia). All eyes will be on Neeraj Chopra ahead of the athletics competitions of the Gold Coast Commonwealth Games. No Indian athlete has ever won a gold in the javelin throw at the Games, but the 20-year-old from the village of Khandra in Haryana’s Panipat district might well break that trend. Chopra, who has a personal best of 86.48m, is coming into the Games with a season’s best of 85.94m. That throw is the best amongst Commonwealth Games this season. Also in Chopra’s favour is the fact that former Olympic champion Keshorn Walcott is skipping the games while 2016 Olympic silver medalist Julius Yego of Kenya has been woefully out of form.

Chopra is one of several medal winning prospects for the Indian team. Competing in what she says will be her final Commonwealth Games, Seema Punia will be looking to end her journey on a high. The 34-year-old who has won two silver and a bronze medal so far will look to go all out this time around.

Triple jumper Arpinder Singh, who won a bronze medal at the 2014 Games, is also bidding to improve the colour of his prize this time around. “I think gold will go for 17m and I feel I can do it,” said Arpinder, the second best jumper among Commonwealth athletes this season with his 16.61 at the Federation Cup.

Also amongst India’s brightest prospects will be 19-year-old high jumper Tejaswin Shankar. The student of Kansas State University, broke his own national record of 2.26m this year with a jump of 2.28m at the Federation Cup this year. That leap was the best amongst Commonwealth Games athletes this year and he is expecting to improve on that performance at the gold coast games. Tejaswin is one of a new generation of athletes who are making massive strides. 18-year-old Hima Das, who will be competing in the individual 400m as well as the relay and 19-year-old Amoj Jacob, who will be competing in the men’s 400m relay

India could even win their first medal on the opening day of the competition itself in the women’s 20km race walk. Race walker B Soumya set a new national record in the women’s 20km walk. Her time of 1.31.28 seconds is the third best by a Commonwealth athlete this season. India’s athletics campaign at the Games will begin with Men’s 20km walk featuring national record holder Irfan KT and Manish Rawat.

With several Indians up amongst the medal winning bracket, coaches are optimistic about the competition. “We are expecting five to six medals this time but don’t ask me what colour they will be,” deputy chief National coach Radhakrishnan Nair said. “And yes, in terms of number of medals, this promises to be our best ever outside India.”