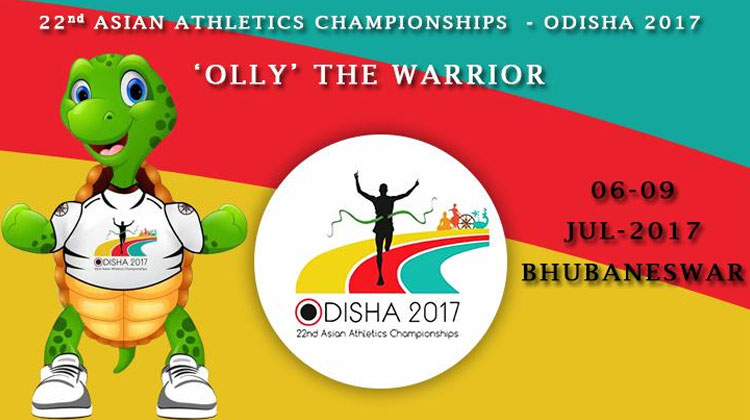 May 07, 2017, Bhubaneswar: The Local Organising Committee of the 22nd Asian Athletics Championships 2017 today unveiled the logo and mascot of the championships in a glittering ceremony held at the Kalinga Stadium Complex in Bhubaneshwar on Sunday, 07 May 2017.

Hon’ble Chief Minister of Odisha, Shri Naveen Patnaik, unveiled the logo and mascot during the official announcement ceremony of the 22nd Asian Athletics Championships 2017.
While logo depicts an athlete crossing the finishing line with historical tourist attractions of Odisha in the background, the mascot of the meet is an Olive Ridley Sea turtle named OLLY. Beaches of Odisha are a prime nesting site for these endangered sea turtles.

Speaking at the gathering, Hon’ble Chief Minister of Odisha said, “I am delighted to be here today to announce that Bhubaneshwar will be hosting the 22nd Asian Athletics Championships. This will be the largest ever sporting event in Bhubaneshwar with participation of 45-countries. More than 700 athletes will participate in 42 athletics event spread over 4 days from 6-9 July, 2017 here at the Kalinga Stadium”.

“Bhubaneshwar has emerged as a sought-after destination for international competitions. The city is also going to host the Hockey World League Final in December 2017 and the prestigious Men’s Hockey World Cup in December 2018. I am sure, these athletics championships will provide substantial exposure to Odia boys and girls who will be watching World Champions in action.

“Kalinga Stadium is being transformed into a world class infrastructure facility for hosting international events as per requirements of International Association of Athletics Federation. All necessary steps are being taken to ensure a pleasant experience for the players, officials and visitors,”

In the 22nd edition of the biggest Athletics meet of Asia, around 700 athletes from 45 Asian countries will participate. The championships will also serve as a qualifying event for the IAAF World Championships 2017 to be held in London in August.

Lauding the efforts being put in by the Odisha Government to host the championships after Ranchi pulled-out few months back, Adille J. Sumariwalla, Athletics Federation of India (AFI), said, “Today, we are all gathered here to take that first step towards realising the idea we have all conceived together. To announce to the world, to announce to the Asian family and most importantly to the people of Odisha, that Kalinga Stadium would be the place where best of the Asian athletes will compete for a berth in the IAAF World Championships,

“When a month ago I came here with the proposal and Odisha said,” Okay, let’s do it.” I myself had doubts how we will be able to do it in such a short time. But today, on Sunday, 7th May 2017, having spent time with the team that is working day and night to make it possible, I can confidently say that the 22nd Asian Athletics Championship will be the best ever Asian athletics meet planned and delivered in such a short span of time”.

“Through these beautifully designed Logo & Mascot, the Championships has now got an identity. The logo and mascot will generate awareness amongst the masses and create a sense of belongingness to the Championships. While the Logo represents the beautiful state of Odisha and the passion to win in everything we do, the Mascot represents the endangered Olive Ridley Sea Turtles whose biggest home is at the Gahirmatha Beach in Odisha. It is indeed a great idea that through this meet we will be contributing towards raising an awareness about preserving the habitat of these beautiful creatures who co-exist with us on this planet”.